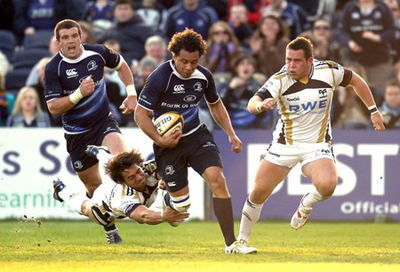 Speaking after the game coach Michael Cheika said: "I didn’t have to say too much to the boys after the game. In the first half we were average at best. The Ospreys are a very good side and we know that we were probably lucky to be only six point behind at the break.

"They played with a big hard defence (against us) and I’d say that we could see them (the Ospreys) again before the end of the season with the way things are shaping up. We rested a couple of players tonight and could have a few more players to maybe come back next week. We’ll just wait and see."

An impressive display from visiting fly-half Dan Biggar, who converted his own try and kicked three penalties, had the visitors 16-10 ahead at the interval. Isa Nacewa had opened the scoring for Leinster with a breakaway try in the 12th minute after a spell of pressure by the Ospreys.

Fergus McFadden, who impressed throughout, kicked the conversion and Leinster led 7-0 before Biggar struck with penalties on 16 and 21 minutes and in the 33rd minute he touched down after spotting a gap in the Leinster defence.

His conversion pushed the visitors into a deserved interval lead, with his conversion and a further penalty extending the advantage to six points, but credit to Leinster who bounced back in the second half.

Shaun Berne accepted a clever inside pass from Paul O’Donohoe after a well-worked lineout to dart into score on 52 minutes. McFadden’s conversion under the posts was relatively straight-forward, while the Kildare man kicked his tenth points of the night in the 78th minute to help Leinster seal a deserved, if unspectacular, win.