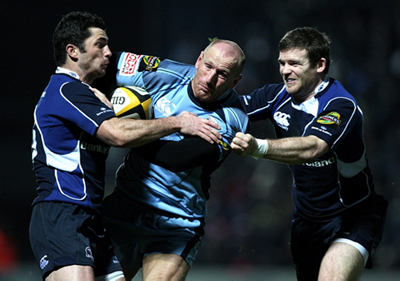 Speaking after the game BEST Menswear Man of the Match Rob Kearney said: “It was hairy stuff towards the end alright, but the high level of competition showed again tonight because everyone had to be on top of their game.

“Over the last three weeks we have been gradually building and tonight was a fantastic result. It was a very tough game and full credit to Felipe for kicking all his goals under pressure.

“It takes a lot of skill to kick those ones and he was my man of the match, while I also thought that Shane Horgan and Sean O’Brien were superb.”

The Argentine struck seven penalties from seven attempts, which clinched it for the Magners League champions in a game that saw skipper Leo Cullen play 80 minutes for the first time since October.

Four Leigh Halfpenny penalties and an Andy Powell try had Cardiff ahead 17-12 as the game entered the final quarter.

But Contepomi landed three penalties in the closing stages, the last of which came after the Blues had regained the lead with a Nicky Robinson drop goal.