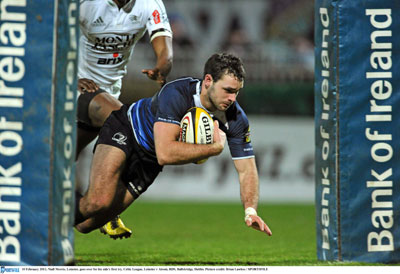 Speaking after the game, Nivea for Men Man of the Match Isa Nacewa said: “There were lots of young guys out there and we came out in the second half and showed a good bit of character, but we made hard work of it at times.

“We were lucky to get away with it at the end, but we’re happy with the win. We’ll take the fight-back as a positive but we have a lot of hard work to do for a big game against Cardiff Blues next week.”

Tito Tebaldi kicked the visitors into an early 3-0 lead before Nacewa levelled the scores three minutes later with a penalty with the first half drifting between both halves with neither side asserting themselves.

In the 34th minute after a spell of pressure number eight Nick Williams crashed over for Aironi, which Tebaldi converted, to make it 10-3, a lead they held into the interval.

A Nacewa 42nd minute penalty reduced the deficit before Substitute Niall Morris gathered a wonderful Richardt Strauss offload after good work by Nacewa to edge the hosts into the lead, with Nacewa adding the points.

A 56th minute Paolo Buso drop goal levelled the scores before Nacewa added his fourth successful kick of the night on the hour mark as the game ebbed and flowed before David Kearney roared in for a try after some excellent work by substitute Shane Jennings in the 76th minute.

Though a Buso penalty reduced Leinster’s lead to five points, the hosts held on to move into second place in the Magners League table.