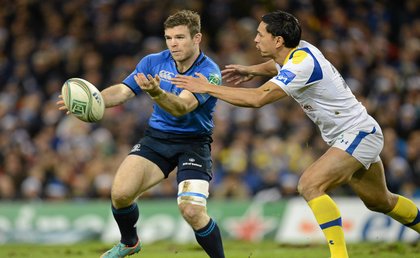 Morgan Parra masterminded back-to-back victories for Clermont Auvergne over Leinster, landing eight of his nine kicks at goal for a towering 23-point haul.

48,964 spectators – an Irish record for a European pool match – watched Wesley Fofana break through for a try six minutes before half-time to help Clermont push 16-6 clear.

As Leinster continued to leak penalties, Parra's left boot kept Clermont on course to end a run of five successive defeats in Ireland since 2007.

The margin was widened to 25-9 before Leinster recovered to score two tries in the closing quarter hour through Shane Jennings and Fergus McFadden, the latter’s effort coming from a daring 78th minute raid.

McFadden’s try garnered a gutsy losing bonus point for Leinster, who are now eight points adrift of Pool 5 leaders Clermont ahead of the final two pool matches next month.

Speaking after the game, Leinster head coach Joe Schmidt said: "It’s very hard to take defeat two weeks in a row with the amount of effort the players put in. The bonus point is handy (in terms of qualification). Miracles happen in sport, I guess, but mathematical long shots seldom come into being.

"I knew Clermont would come to play and they’d be better than they were last week – I think we out-thought them last week and they just out-muscled us this week.

"I’ve said it before, it’s one of the flaws and the beauties of the Heineken Cup that you can have semi-finalists from last year slugging it out in the same pool.

"I knew when I saw the pool how tough Exeter and the Scarlets were, so to look anywhere beyond our next game is very tough to do and I think all calculations are off at the minute."

The visitors drafted in prop Raphael Chaume and flanker Julien Bardy, while their Australian number 10 Brock James passed a late fitness test on a groin complaint.

The rugby was typically fast and frantic early on with Leinster seizing upon two turnovers and Sexton running smartly to almost link up with hooker Strauss.

Damien Chouly and Napolioni Nalaga carried well before Clermont won a left-sided penalty that Parra poked through the uprights for a seventh minute lead.

Sexton and Parra swapped penalties at the end of the first quarter, the France scrum half replying almost immediately as Jamie Heaslip came in at the side of a ruck.

The tempo was lifted by the hosts under Sexton’s baton, courtesy of a muscular turnover in midfield and pressure from Mike Ross on Chaume in the scrum.

A second three-pointer from Sexton brought Leinster level again, but Clermont were well organised in defence and were quick to counter when offered space.

A loose Madigan kick invited Davit Zirakashvili to hurtle into contact, setting up a power-packed attack that led to centre Fofana probing in the right corner.

James’ tactical kicking was on the money, giving his side plenty of targets and Clermont really came to the boil before the interval with Parra’s third penalty moving them back ahead.

Sitiveni Sivivatu then sparked a three-man surge down the left. Nalaga was chopped down short of the try-line but Fofana proved unstoppable as he darted onto quick ruck ball to dot down from close range.

Parra’s terrific conversion increased the pressure on Leinster who struggled to find top gear. Another indiscretion – this time Ross infringed in a scrum – allowed Parra to fire over the first points of the second half, his kick bending in from right to left.

Sexton cancelled that score out as Leinster mounted a strong response, with replacement Cian Healy being part of a penalty-winning scrum on halfway. However, Sexton was unable to convert the resulting 50-metre kick.

After the wily Parra took a quick tap, Sean O’Brien’s early challenge on Sivivatu earned him a yellow card. Parra nailed the penalty for a 22-9 scoreline.

Vern Cotter’s men really had the bit between their teeth now, hammering home their numerical advantage up front. Captain Aurelien Rougerie and Nalaga both went close to scoring a try that would have sewn up the result.

Ross was replaced by Michael Bent as Leinster doggedly defended their line. Parra potted a 32-metre penalty having struck the woodwork with an attempt from the right four minutes earlier.

Clermont had a foot on Leinster’s throat, but the champions showed their quality as Sexton kicked a penalty to touch, Devin Toner won the close-in lineout at the front and a muscular maul led to flanker Jennings plunging over for a 65th minute try.

Sexton’s conversion closed the gap to nine points. However, the imperious Parra replied by landing his final penalty to punish Healy for not rolling away.

Clermont lost their openside Bardy to the sin-bin for the final six minutes and Leinster rallied with a break out of their half by O’Brien and Sexton, with the out-half delaying his pass neatly for McFadden to score in the right corner.

The conversion was missed by Sexton, but Leinster had done well to fight back for a single match point which keeps them in second place and in contention to reach the last-eight.