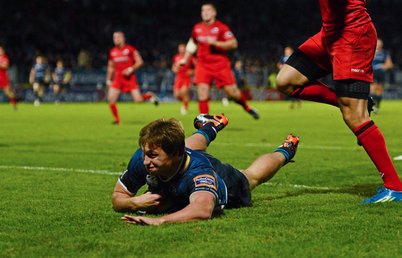 Jonathan Sexton, the province’s late hero against Benetton Treviso, slipped through for an eighth minute try to get them off the mark in this round 4 tie at the RDS.

But Edinburgh, winless in Dublin for seven years, came to the fore in the second quarter with Greig Laidlaw rewarding them with a brace of penalties.

That left Leinster hanging onto a 10-6 lead for the break and although Brendan Macken’s tries extended the lead, Edinburgh fought back to take the game right down to the wire.

The Scots recovered from two sin-binnings to grab a late try from South African prop Willem Nel, ensuring a nervy finish for the home side.

Leinster managed to hold out for a hard-earned four points, a welcome return given that Eoin Reddan was unable to start due to injury and a knock to the ribs forced Gordon D’Arcy off after 27 minutes.

Speaking afterwards, Leinster head coach Joe Schmidt said: “They were able to put pressure on us right until the end of the game. It was a little bit nerve-wracking.

“We got the win, a pretty untidy one but we knew that after the last result here against Edinburgh that they would come here with a lot more resolve. As I said before the game, they’re a team that has certainly stepped up from last season.

“We always know that we’re vulnerable at this time of year. It’s not just about getting players back, it’s about getting continuity between those players. Losing Gordon D’Arcy early on, losing Eoin Reddan in the lead up to the game wasn’t ideal.”

Proceedings began on a sombre note as a minute’s silence was impeccably observed in honour of Ulster’s Nevin Spence who died tragically last weekend.

The match got underway amid a fans’ rendition of ‘Stand up for the Ulstermen’ and Leinster built up an early head of steam, threatening from quick ball.

Sexton sent Cian Healy hurtling through a sleepy Edinburgh midfield, and the out-half followed up to spear through a gap in the drifting defence and score the opening try.

The left-sided conversion was added by Sexton who moved Leinster into double figures by the end of the first quarter, landing a penalty from the right after Andrew Conway was kept out close to the try-line.

Missing the services of ace finisher Tim Visser, Edinburgh were unable to fire a shot until Netani Talei and Stuart McInally made a couple of midfield busts.

A snappy break from Richie Rees got the Scots into scoring range and after Nick De Luca‘s near miss from a hanging kick, their captain Laidlaw potted a simple penalty for 10-3.

Edinburgh drew closer thanks to a longer strike from Laidlaw, just past the half hour mark, as an increasing amount of unforced errors left Leinster frustrated.

Lee Jones was thwarted by Isa Nacewa in a one-on-one out wide and the hosts scrambled well in defence to bring down De Luca and fellow Scotland international Ross Ford.

Into the second half, Leinster needed a spark of inspiration and it came from replacement centre Macken who launched a superb counter attack from deep.

Backs and forwards combined brilliantly – Healy, in particular, put in some powerful carries – to keep the move going and Edinburgh prop John Yapp’s efforts in slowing up a close-in ruck resulting in him being yellow carded.

As Leinster pressed again, the Scots had lock Sean Cox sin-binned for killing the ball. The under-strength Edinburgh scrum managed to stave off a pushover score though, and debutant Tom Denton was also tackled into touch.

The numerical advantage eventually paid off for Leinster in the 57th minute as they flooded forward in support of the fast-breaking Fionn Carr, who passed for Macken to finish off in the right corner.

Sexton was unable to convert and Edinburgh responded with another Laidlaw penalty on the hour mark to stay in the hunt.

However, a bout of hard running and crisp passing helped Leinster take a sizeable leap towards victory. Man-of-the-match Macken snuck through for his second try, profiting from Jordi Murphy’s pass out of a tackle.

Edinburgh were far from finished, their forwards carrying with purpose in the shadow of the posts and a lovely pop pass from Rees put replacement Nel over in the 71st minute.

Laidlaw converted to give the Scots a losing bonus point and there were no further scores despite plenty of action in both 22s.