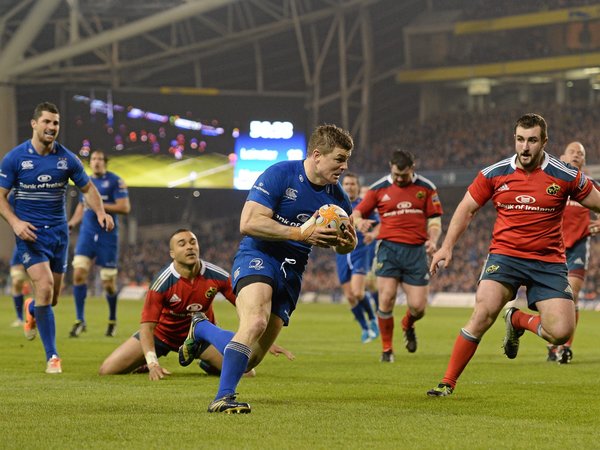 O'Driscoll has made a habit of scoring in this fixture – he struck twice against Munster last season and was also the match winner here at the Aviva Stadium in 2010.

The Irish provinces' latest Dublin duel was initially going Munster's way until Leinster turned things around in the second half.

With 57 minutes on the clock, influential flanker Shane Jennings put O'Driscoll over for the decisive try while Munster prop David Kilcoyne was in the sin-bin.

Ian Keatley's fifth and sixth penalties of an unblemished night with the boot set up a frantic finish at 19-18, but a 79th minute kick from Ian Madigan made certain of the home win.

The visitors had opened up a 9-0 lead by the 22nd minute with two of Keatley's opening three penalties coming from Munster's assertive scrum.

Matt O'Connor's home side ended the first half with a two-thirds share of possession. Two Madigan kicks closed the gap to 12-6 by the interval, before O'Driscoll and man-of-the-match Jamie Heaslip drove Leinster to a hard-earned comeback victory.

Speaking afterwards, Leinster head coach Matt O'Connor said: "At 6-0 down we were chasing the game a little bit and there was a long way to go, and I was a little bit surpised by us. That was largely because of Munster's intensity, they started the game very, very well.

"They got some results early in the game that gave them a bit of a cushion on the scoreboard and we were under a bit of pressure. But the fightback was enormous.

"We understood how important it was to put out a quality performance at home in front of a sell-out at the Aviva. That was enormous motivation for us.

"The four points are huge. It puts us in pole position in the league which is our bread and butter and it's hugely important to the whole organisation.

"There were a lot of things at play tonight and we came out on the positive side of the ledger on most of them."

He added: "Brian just got a bang on the neck. He was over the ball and he got his neck twisted, but he'll be fine.

"Cian (Healy) was really close to playing this morning. I'd be very surprised if he doesn't take to the field next week (against Toulon)."

There were some notable absentees for this top of the table clash, Cian Healy, Jack McGrath, Martin Moore and Dave Kearney missing out for the hosts while Munster captain Peter O'Mahony pulled out just before kick-off.

A hamstring twinge sidelined O'Mahony as a precautionary measure with the province hosting Toulouse in Europe next week, and hooker Damien Varley retained the captaincy from their win over Benetton Treviso.

The injuries were not just confined to the players as French referee Pascal Gauzere had to be replaced during the week by Alain Rolland, the ex-Leinster and Ireland scrum half who is retiring from refereeing at the end of the season.

A typically robust opening saw blood falling from a wound on Paul O'Connell's face within two minutes. Before temporarily departing, he helped Munster win a scrum penalty and Keatley's close range kick put them ahead.

A second successful penalty followed from inside the 22, rewarding half-breaks from Simon Zebo and Tommy O'Donnell as Munster's positive start continued.

There were glimpses of O'Driscoll's brilliant sleight of hand as Leinster improved approaching the midpoint of the half. Wingers Luke Fitzgerald and Fergus McFadden also competed strongly for aerial balls.

However, Munster's scrum was becoming more dominant and a strong shove near the ten-metre line set Keatley up for his best strike of the night.

Madigan snapped back three points with a difficult penalty from the left, before Kilcoyne forced another scrum penalty out of Mike Ross and Keatley's kick split the posts.

Leinster increased the tempo in sight of half-time, the busy Fitzgerald chasing down an O'Driscoll dink over the top and the resulting five-metre scrum – Ross getting the call this time – saw Madigan half Munster's advantage on the scoreboard.

The Leinster out-half, who missed a kickable chance in injury-time, quickly got his side off the mark in the second half – his half-back partner Eoin Reddan's break doing the initial damage.

The penalty count against Munster increased with David Foley singled out for not rolling away. Madigan mopped up with the points to bring Leinster level at 12-all.

The pressure increased on Munster when Kilcoyne was sin-binned for the same offence as Foley's, with Leinster beginning to build momentum in and around the 22.

They moved ahead for the first time when Jennings took the ball up and his inviting offload out of the tackle sent O'Driscoll scampering over from a few metres out.

Madigan converted for a 19-12 scoreline, but 14-man Munster countered superbly with CJ Stander spearheading a drive for a left corner. They came away with an important three points converted by Keatley.

O'Driscoll's night was ended by injury past the hour mark and the Leinster defence had to withstand some energetic running from the likes of Zebo, Keith Earls and speedy replacement Gerhard van den Heever.

Munster kept pressing and a high tackle by Ross on Stander gleaned them another three points from Keatley, before a crossing call against O'Donnell allowed Madigan close out Leinster's tenth straight win in all competitions.

LEINSTER SCORERS: B. O'Driscoll (1 try), I. Madigan (1 conversion and 5 penalties) 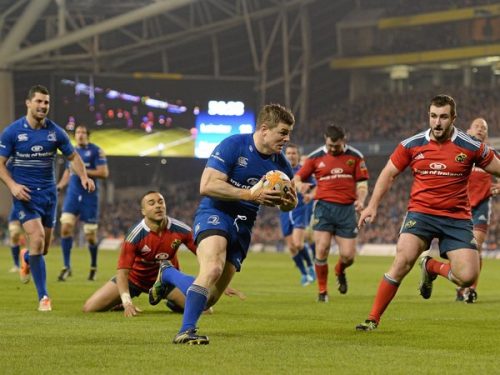