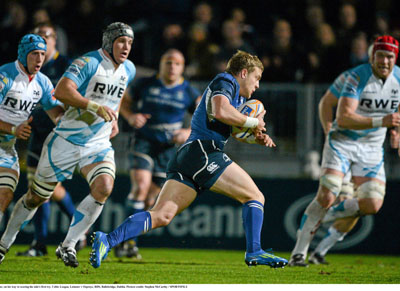 With only the RaboDirect PRO12 title left to aim for, the Ospreys prevailed in a grandstand finish with Richard Hibbard’s 76th-minute converted try proving crucial.

Hibbard burrowed over in the right corner for a touchdown which needed confirmation from television match official Alan Rogan.

The hooker’s score made it a one-point game and Dan Biggar kicked the all-important match-winning conversion, with a kind bounce off the left hand upright.

Ian Madigan’s opportunist try had given Leinster a decent 16-6 cushion at the break, with Fergus McFadden outkicking Biggar.

But McFadden could only add two more penalties to Leinster’s tally as second half tries from George Stowers and Hibbard inspired the visitors’ fight back.

Leinster head coach Joe Schmidt was pleased to see Brian O’Driscoll and Leo Cullen both come through the game unscathed, while debutant Brad Thorn also made an impact particularly in the first half.

“Leo Cullen is just a great solider. He was half a lung short in the last 20 minutes but he really soldiered on. He showed a cool head and you can’t fault the decisions he made,” said Schmidt afterwards.

“Brad put in a great performance. He’s still fitting into our system. He was slightly out of kilter but he made his presence felt on a couple of occasions as well.

“Brian looked very sharp for a guy who hasn’t played as long. And as time goes on, he’ll be able to put in an 80 minutes for sure.”

He added: “I’d say I’m really disappointed about the try decisions. It looked pretty clear to us that Heinke had scored. Maybe it was the question that was asked, try yes or no?

“And then I’m not sure if you had a look at the replay of theirs, but we have guys who are pretty adamant that they didn’t get it down. I don’t know what the question was for that try.”

The large Leinster crowd welcomed O’Driscoll back from a neck/shoulder injury, for his first outing since the 2011 Rugby World Cup.

Captain Cullen also made his first appearance since Achilles surgery, coming in partner All Black Thorn in the province’s second row.

The Ospreys had Wales Grand Slam winners Alun Wyn Jones, Ryan Jones and Justin Tipuric in their starting line-up, but fell behind to a second minute penalty from McFadden.

O’Driscoll beat two defenders in his first involvement in attack, yet the Ospreys reacted smartly to an Andrew Bishop-led counter and their first visit to the 22 duly resulted in three points from Biggar.

McFadden missed a chance to reply and the Ospreys, fired up after back-to-back defeats in the league, competed ferociously to slow up Leinster ruck ball.

The hosts got on the front foot again, setting up a 21st minute penalty which McFadden landed and he then followed up with a terrific 51-metre effort for a 9-3 advantage.

A series of handling errors frustrated the Ospreys and Biggar sliced a kickable penalty to the right and wide, before Madigan caught them off guard in the 33rd minute.

Richardt Strauss’ lineout throw was missed by Rhys Ruddock, but the alert Madigan broke onto the bouncing ball at the back of the lineout and scampered wide of Hanno Dirksen to grab his seventh try of the league campaign.

McFadden’s conversion was cancelled out by another Biggar penalty, reducing the margin to 10 points, and the Ospreys built some momentum early in the second half.

After a fourth successful McFadden penalty, Richard Fussell countered brilliantly to set up a scrum in front of the Leinster posts, and Biggar split the posts from close range.

Just a minute later, Kahn Fotuali’i set up an eye-catching charge down the right from Dirksen. He linked with the supporting Ashley Beck who passed out of the tackle for number 8 Stowers to finish off the move of the match.

Biggar added the extras to reduce the arrears to 19-16. Leinster reacted with a prolonged spell in the visitors’ 22 during which Heinke van der Merwe was held up twice over the line.

Thorn and O’Driscoll were withdrawn short of the hour mark, by which time McFadden had widened the margin to six points. An unfortunate rib injury to prop Jamie Hagan brought youngster Jack McGrath into the fray on the tighthead side of the scrum.

The Ospreys were reduced to 14 men when flanker Tipuric was sin-binned in the 62nd minute for what referee Peter Fitzgibbon deemed a dangerous tackle on Kevin McLaughlin.

McFadden’s resulting penalty fell short of the target though and the Ospreys, using the platform of an Adam Jones-boosted scrum, had the better of the closing stages.

Man-of-the-match Biggar and replacement Rhys Webb provided the direction and with space out wide, Hibbard scrambled over past a couple of despairing tackles.

Like van der Merwe’s effort the TV replays looked inconclusive, but Rogan gave the go-ahead for the try and Biggar tagged on the extras to seal a win that keeps the Ospreys in the hunt for a home semi-final.