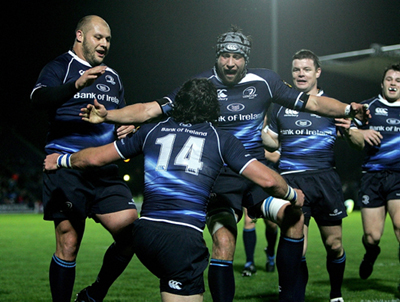 Speaking after the game, Leinster Coach Michael Cheika said:  “I think that there was some poor parts to our game, in particular around the ruck with the ball placement. We actually made some good breaks, but we weren’t able to secure the next phase well enough to get that into our set up.

“We were lucky that Blair wasn’t a bit more accurate, we would have been under a bit more pressure. I think it’s representative of where we are at this part of the season.

“We strung some good bits of play together at the start of the game, but the game goes for eighty minutes and there was a lot of players in the Cardiff team who, because they don’t get the chance week in, week out, they were keen to show themselves.

Tries from Shane Horgan and Stephen Keogh drove Leinster to a 17-point win over the Cardiff Blues at the RDS, with out-half Jonathan Sexton kicking 13 points to help his side to a deserved victory.

In the 11th minute Luke Fitzgerald, who was a constant thorn in Cardiff’s side, broke and Gordon D’Arcy took the ball on and when the ball fell for Sexton he expertly kicked ahead for the impressive Shane Horgan to pounce and score to send the home crowd into delirium.

Ben Blair kicked penalties on 30 and 37 minutes for the visitors to leave Leinster with a 13-6 half time advantage, but in a tense second half with neither side creating opportunities it took a 77th minute effort from replacement Stephen Keogh who barged in from close in to seal the win and return Leinster to the summit of the league.