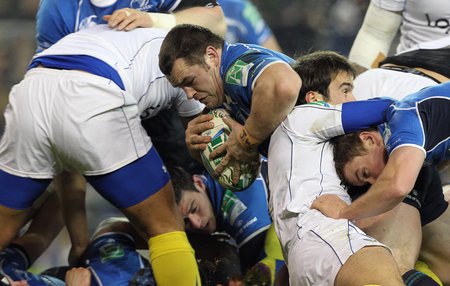 Speaking after the game a delighted Heineken Man of the Match Cian Healy said: "It was great to bring a home fixture here and the atmosphere was unbelievable. There was so much passion in the fans again and we're happy with the win.

"When you get an opportunity to start you have to take it because there's a lot of quality in the squad and Heinke (van der Merwe) has been playing so well. You've just gotta put it (effort) in because you know that you're playing for your place.

"We're extremely passionate about what we do every time we pull on the shirt and it's a pretty happy dressing-room in there."

A record Heineken Cup pool attendance for an Irish province of 44,873 saw Joe Schmidt's side establish a 10-3 half-time lead on the back of Cian Healy's eighth-minute try.

The inventive Isa Nacewa and O'Brien were prominent in attack as Leinster took the game to the reigning French champions, and a pass back inside from O'Driscoll almost sent Richardt Strauss over on a diagonal run.

Good clearing out at a ruck set up another immediate chance and Healy plunged over from just metres out. Jonathan Sexton tucked the difficult conversion over from the left. With Shane Horgan putting in another barnstroming performance and D'Arcy looking dangerous with ball in hand, Leinster pressed for another score.

After a spell of pressure in the third quarter tries from man-of-the-match Healy and Sean O'Brien and a nine-point kicking contribution from Sexton put the result beyond doubt.

Clermont Auvergne's only response in the second half was an unconverted try from Napolioni Nalaga. Leinster go into the Christmas period leading the pool by five points, but face big tests at home to Saracens in the RDS in Round 5 and away to Racing Metro-92 in Paris (the dates for both games should be confirmed in the coming days).