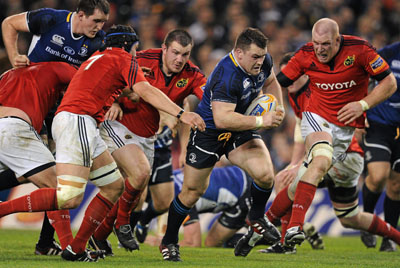 A crowd of over 48,000 watched Sexton finish with an unblemished kicking record which proved crucial as Munster fashioned a late penalty try.

Ireland out-halves Sexton and Ronan O’Gara exchanged a succession of penalties during a defence-dominated first half, with the former pushing Leinster into a 15-9 interval lead.

Despite the best efforts of O’Gara and a durable Munster pack, Sexton and drop goal scorer Rob Kearney kept the Blues in control of the scoreboard all the way to the final whistle.

The derby success gives Leinster a winning lead-in to the start of their Heineken Cup title defence away to Montpellier next weekend.

With most of their returning Rugby World Cup players back on board, Leinster were determined to maintain their impressive form at the Aviva Stadium where they beat Munster, Clermont Auvergne, Leicester Tigers and Toulouse last season.

Munster suffered an early setback when Keith Earls fielded Sexton’s kick-off and injured his left knee as he set up a ruck near his 22.

Danny Barnes was sprung from the bench in his place and the visitors soon took the lead, O’Gara drilling over a penalty after Donncha O’Callaghan poached a Leinster lineout.

But the home side were back level by the tenth minute, their Leo Cullen-led forwards gaining good ground before Sexton fired over his first of his 21 points.

Every mistake was magnified in a typically frenetic and abrasive opening, with Sexton moving Leinster 6-3 ahead after Donnacha Ryan infringed at a midfield ruck.

Tempers flared briefly before O’Gara and Sexton exchanged penalties once again, and with space at a premium neither attack was able to prize open a gap.

The first break eventually came when the returning Cian Healy thundered through a couple of tackles and brought play up close to the Munster try-line. However, Leinster could not convert an overlap on the left and had to settle for another penalty goal from the in-form Sexton.

Five minutes later, Munster drew a penalty from a well-orchestrated maul and O’Gara had little difficulty in splitting the posts from the left.

But when BJ Botha infringed at a scrum just inside the visitors’ 22, Sexton restored Leinster’s six-point advantage for half-time.

The nip and tuck pattern continued into the second half with O’Gara and Sexton swapping penalties, although an injection of pace from Luke Fitzgerald and Fergus McFadden got Leinster’s attack firing.

Isa Nacewa was only just crowded out in the right corner but space was beginning to open up as evidenced by midfield bursts from Barnes and Gordon D’Arcy.

Now enjoying better quality possession, Leinster moved nine points in front when, with a penalty advantage, Kearney was teed up for a sweetly-struck drop goal from 35 metres out.

Schmidt’s charges were beginning to punch some holes in the Munster defence, the snappy passes from Isaac Boss inviting his team-mates to have a cut.

When Denis Leamy killed quick ruck ball for Leinster and received a yellow card from French referee Pascal Gauzere, Sexton made it a double scores lead at 24-12.

O’Gara suffered his first miss two minutes later, yet Cullen and company had to be on their toes to keep the 14 men of Munster at bay.

Leinster defended feverishly as Munster worked their maul again from a seies of close range lineouts. But the men in blue were not going to budge and although they lost Jamie Heaslip to the sin-bin, their defence frustrated Munster and won a relieving penalty.

Tony McGahan’s side did manage to win a penalty try after putting pressure on the Leinster scrum late on. O’Gara’s conversion closed the gap to five points but Leinster kept their composure and celebrated at the end of another bruising contest with their fiercest rivals.