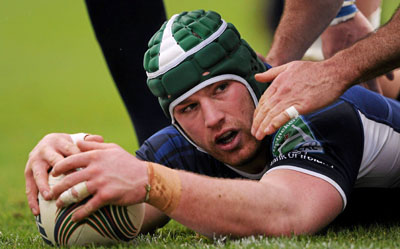 In blustery conditions, Sean O’Brien’s ninth-minute try settled any early nerves and man-of-the-match Rob Kearney used his speed and strength to nab his fourth try of the pool stages.

Montpellier had no points to show for a long spell in the home 22, trailing 20-0 at the break with Fergus McFadden booting the rest of Leinster’s points.

Joe Schmidt’s men went further ahead with a try from Cian Healy and in a scrappy final half hour, Martin Bustos Moyano kicked a penalty for the visitors.

The result completed an unbeaten run through the six rounds for the Pool 3 winners, who are guaranteed to be one of the top seeds in the knockout stages.

Leinster head coach Joe Schmidt said afterwards: “A couple of nice plays came off for us to get a couple of tries and build a seventeen-point lead and I thought there was really good character to defend off our line the way we did.

“There was a mix of the flashy stuff and the real ‘roll your sleeves up’ stuff. Those two things gave us the half-time advantage and it was fantastic to score (the try) after half-time.

“It’s a little bit hard, even more this year because there has been three months consecutive, but it’s nice to have a bit of momentum, put a few good results together even if they haven’t all been great performances.

“We just have to bide our time, watch a bit of Six Nations and hope guys come out of that fully fit.”

Leinster were forced into a late change with Schmidt not willing to risk Jonathan Sexton, who suffered a knock to his left ankle in the win over Glasgow Warriors.

Ian Madigan came in for his first Heineken Cup start, distributing well early on as the wind-backed hosts enjoyed the early possession.

Purposeful runs from front rowers Richardt Strauss and Healy pinpointed the chinks in Montpellier’s defence, and soon after a short burst from O’Brien, aided by Damian Browne, saw him muscle over from close range.

McFadden added the conversion and a penalty to take the province into double figures, before Kearney sliced through off first phase ball.

From a midfield scrum, Isaac Boss and Gordon D’Arcy combined to send the full-back through the defensive line and although Paul Bosch hauled him down, Kearney stretched out his left arm to get the touchdown.

McFadden made it a seven-pointer but good ball retention from the visitors’ bulky forwards got them close to a first try, big Mamuka Gorgodze being thwarted by Leo Cullen and O’Brien.

Leinster held them up again through a series of five-metre scrums and assaults on their line, albeit with lock Browne being sin-binned for side entry at a ruck.

It was a punishing period for the home forwards but the French outfit just could not break them down, with a steal from tournament debutant Jamie Hagan lifting the siege.

Montpellier captain Fulgence Ouedraogo infringed at a central ruck as Leinster finished the first half back in the visitors’ half. McFadden rifled over the resulting penalty.

A sparkling run from Isa Nacewa helped Leinster lay down an early marker in the second half.

D’Arcy went close to scoring in the right corner before Healy powered over on a muscular drive with support from Rhys Ruddock and replacement Mike Ross.

Kearney was inches away from scoring his second try, his attempt from a quick tap being snuffed out by the well-placed Alex Tulou.

Substitutions diluted the intensity slightly until a final spurt from both sides saw Montpellier get off the mark and Leinster fail to muster a bonus point score, with McFadden lacking the support required to finish off the best of the chances.