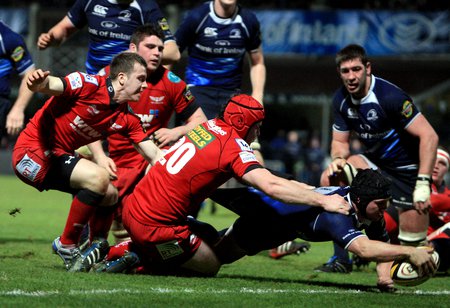 Speaking after the match, Fergus McFadden said: “The game was quite patchy at times and in the first half especially we coughed up a fair amount of ball. The Scarlets throw the ball around well and they got two tries which we wouldn’t be happy with.

“We knew about their strengths coming into the game and they’re a very dangerous side, so we knew that we had to take whatever chances came our way. At the end of the day though we won and we denied them a bonus point – four points is four points.”

Leinster began the game brightly and Niall Morris was the first name on the scoresheet when he skilfully fended off the Scarlets challenge to race clear into the North end of the ground after some excellent work involving Isaac Boss, Fergus McFadden and Isa Nacewa’s assist out wide.

Sexton added the points to make it 7-0 to the hosts.

Rhys Priestland had two penalty misses either side of a successful 20th minute shot from Sexton, before he redeemed himself near the half-hour mark.

It closed the gap for the Scarlets down to 10-3 at half-time, but Leinster looked solid with Sexton pulling the strings in a strong all-round performance.

With the back-row unit of Dominic Ryan, Kevin McLaughlin and the industrious Rhys Ruddock putting in strong individual and collective shifts, Leinster began to gain dominance in the forward exchanges and penalties from Sexton on 42, 49 and 54 minutes pushed the Blues into a 19-3 advantage.

A Rhys Thomas try on the hour mark, converted by Priestland, reduced Leinster’s lead but by the time that Isaac Boss touched down for his first try Leinster were in control, albeit with the scrum-half’s effort coming via confirmation from the TMO.

Sexton completed a 100% haul to make it 26-10 and though Nick Reynolds touched down late on for the Llanelli based side after some good work by the impressive Regan King, Leinster held on in a game which saw debutant Daniel Riordan become the 50th Leinster player to feature in the Magners League so far this season.

LANTECH IT MAN OF THE MATCH: Dominic Ryan