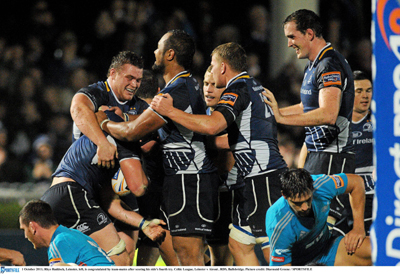 Speaking after the game, Leinster Coach Joe Schmidt said: “I felt that we created a few chances in the first so, even though we were behind, there was no real sense of panic. I was delighted with the pressure that we applied in the second half and we felt that it was there to take.

“To be honest, we’re delighted to get the win and the bonus point but we know that it will be a massive challenge next weekend against an in-form Connacht.”

Leinster began strongly but with conditions poor for both sides after heavy rain for most of the day, the game started as a battle with neither side asserting themselves.

In the 10th minute a marauding Rhys Ruddock break and good aggressive work from Steven Sykes, one of two debutants in the Leinster team alongside young out-half Noel Reid, almost reaped a reward.

Though that attack was quelled the hosts did have a chance to gather points for their territorial dominance however Isa Nacewa’s kick fell under the posts at the Southstand end of the ground.

Some strong work by the dynamic Luke Fitzgerald and Nacewa in the 19th minute gave Leinster their second scoring chance but that penalty fell wide of the target from the usually reliable Nacewa while a third effort also narrowly missed the posts after some good initial work by Devin Toner.

Credit to the Italian visitors who sensed an opportunity and in the 35th minute, after what was one of their few attacking threats, former Munster number eight Nick Williams crashed over for the opening try of the game – which was converted by Tito Tebaldi – to give Aironi a 7-0 lead which they held on to into the half time break.

Ian Madigan entered the fray after the interval in place of Reid who showed positive signs in the opening period and the former Blackrock College man skilfully weaved through a gap in the Aironi defence to score Leinster’s first try in the 48th minute, with Nacewa adding the extras thus levelling the scores, 7-7.

Eight minutes later Nacewa profited from some good initial work by Leo Auva’a, skipper Ruddock and then Heinke van der Merwe – who put in a strong shift around the park – and the full-back darted across the try-line to give the Blues the lead.

Leinster’s tails were up at this stage and in the 67th minute Fitzgerald gathered an intercept pass near the half way line and sprinted clear to score his side’s third try under the posts, with Nacewa converting, to make it 19-7.

With the hosts sensing a bonus point they approached the last ten minutes with real venom, coming close on several occasions before Rhys Ruddock gathered a ball from a scrum close in to touch down on the stroke of full time, with Nacewa adding the two points, to send the home support who braved the inclement weather, into delirium.