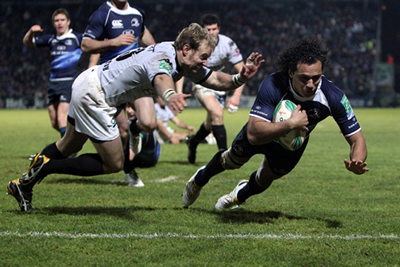 Speaking after the game Heineken Man of the Match Jamie Heaslip said: "We didn’t finish off the breaks that came our way, but there was a real determination in our defence and overall we’re happy to get the bonus point (win).

"Brive kept coming at us in fairness to them, but we showed a lot of belief in the closing stages to get the extra point. We’re all excited about next week’s game. It’s going to be a huge game and it is important that we go up another level against London Irish."

The champions were awarded a penalty try on 26 minutes, with Jonathan Sexton adding a conversion and penalty to make it 10-0 to Leinster at half-time.

After a scoreless first quarter, Leinster were awarded a penalty try in the 26th minute, which Sexton converted.

Sexton and Shane Horgan then both went close to crossing the Brive line but were kept out by determined defence from the visitors.

They finally extended their lead when Nacewa finished off a fine move involving D’Arcy, O’Driscoll and Rob Kearney four minutes after the break to claim his first Heineken Cup try.

D’Arcy breached the Brive rearguard to set up a tense conclusion as Leinster chased the bonus point which finally came when a delightful inside pass from Horgan found the onrushing O’Driscoll who scored to send the 17,836 crowd into delirium.

Leinster’s final game is against London Irish at Twickenham next Saturday (KO: 6pm).