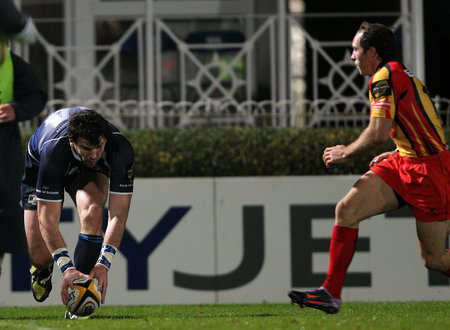 Speaking after the game Canterbury Man of the Match Shane Horgan said: “It was important to win and we’re delighted to get the bonus point. We got off to a slow start but we were composed and it’s nice to be a part of a team that plays a nice brand of rugby.

“It’s important that we keep winning and I know that all the guys who are in Ireland camp were looking on and willing us to do well.”

Shaun Berne, making his first start of the season, pushed Leinster into an early 5-0 lead after a well worked move involving Horgan and some initial impressive ground work by the influential Shane Jennings, led to a 2nd minute try.

Isa Nacewa added the points and the hosts were on their way with Nacewa adding his third successful kick of the night five minutes later to make it 10-0. The Dragons fought back and were rewarded with an 11th minute Jason Tovey penalty, in the 25th minute Berne turned provider when an expert cross-kick found Boyne man Horgan who had the easiest of touch downs in the corner.

Full-back Nacewa again added the points to make it 17-3, a lead which Leinster held into the half time interval.

A trio of substitutes gave the hosts fresh impetus and they set about the second half with relish. Though Tovey would reduce the deficit to 11 points with his 48th minute penalty, Horgan touched down for his second try of the night 13 minutes later.

With Rhys Ruddock and the excellent Eoin O’Malley making significant inroads the bonus point try was imminent and soon the Blues’ hard work was rewarded when scrum-half Isaac Boss took a clever O’Malley pass to make it 27-6 in the 67th minute.

Leinster pressed in the closing stages but the Dragons rearguard withstood the onslaught on a pleasing night for the Irish province.