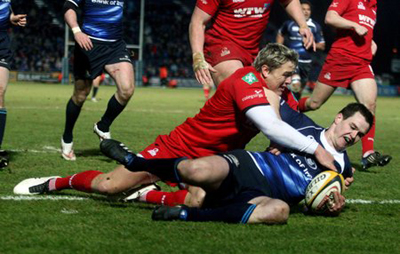 Speaking after the game, BEST Menswear Man of the Match Jonathan Sexton said: "We’re delighted with the win, if not the performance because we were scrappy enough. At times it showed that we hadn’t played for a few weeks.

"We know what they can do with the ball and we were well aware about the kind of pressure that they would put on us, so it was good to get the win and it pushes us up the league table.

"We’re fortunate that we get a great turnout every week here (in the RDS) and it’s turning into a tough venue for opposition teams to come to. The supporters were great again tonight."

Ken Owens finished off a glorious move for the Scarlets after 19 minutes by which time Sexton and Rhys Priestland had traded penalty efforts, but Isa Nacewa’s reply put Leinster 13-11 ahead at half-time.

An initial burst from CJ van der Linde led to a ruck and from the resulting play Eoin Reddan found Shaun Berne who released Nacewa who touched down into the corner.

Sexton added the points and Leinster held on to a slender 13-11 lead at the interval.

Leinster began the second half strongly, with replacement Stephen Keogh to the fore with a series of superb carries, and penalties from Sexton on 48, 57 and 68 minutes widened the gap further.

And it was Sexton who capitalised on a superb break from 18-year-old Andrew Conway – one of two debutants for the hosts alongside replacement hooker Richardt Strauss – in the 79th minute, and the Ireland Under-20 star’s burst into the Scarlets 22 found the supporting Sexton who crashed over to score.

*The victory was marred by an early injury suffered by Leinster’s Sean O’Brien, who was pressing for selection against England. The promising flanker had to be carried off on a stretcher in the 5th minute and it subsequently emerged that he has unfortunately suffered a fractured leg and will be out of action for the immediate future.