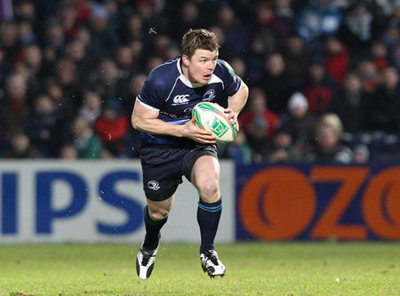 Speaking after the game, Heineken Man of the Match Jamie Heaslip said that the team were delighted to progress through to the semi finals.

He said: "It was a see-saw kind of a game and there are mixed feelings in the dressing-room. They dominated at times and there’s a real sense of relief because they could have shaded it at the end.

"Credit to the lads. We dug deep and got momentum at key stages in the game. We’re happy with the win but we know that there’s a lot of work still to be done. In this competition sometimes you need a bit of luck. I’m sure it was a great game to watch, but it was nervous enough to play in!"

A Julien Malzieu try helped the French side to a 10-0 lead but two fine Jamie Heaslip tries, the first after some superb vision by Brian O’Driscoll, saw Leinster recover to lead 20-10 at the interval.

Malzieu scored two further tries as his side moved five points ahead but then Jonathan Sexton, who kicked superbly throughout, slotted home two penalties.

The Leinster pack were typically industrious, with the likes of Leo Cullen, Kevin McLaughlin and Nathan Hines each putting in impressive shifts, while Eoin Reddan’s half-back partnership with Sexton bore fruit for the hosts throughout.

After 65 minutes Reddan almost came close to scoring, but the TMO adjudged that his effort was short of the line.

As the drama unfolded Brock James had a late drop-goal to win it for Clermont, but pushed it wide to send the home support into euphoria as the Heineken Cup dream continued.

*Leinster will now face the winners of Toulouse / Stade Francais in the semi finals.