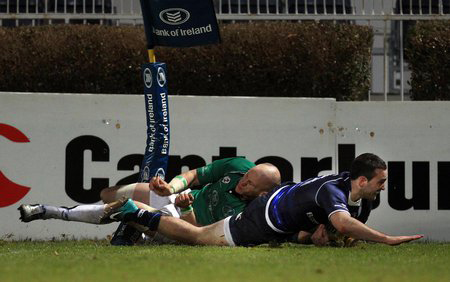 Speaking after the game, Best Menswear Man of the Match Shane Jennings said: “As expected it was a tough game and they played deserve a lot of credit because they played well and had us under a lot of pressure.

“We got a bit more of the ball as the game went on and did a bit more damage but Connacht were in charge for the first 20 minutes and we put ourselves under pressure.

“The Ospreys next week is another big challenge and every game is going to be tough as we bid to get into the top four in the league. Thankfully it came good for us at the end, but there are a lot of frustrated heads in there (changing room), myself included.”

Connacht began strongly and were in control of the opening exchanges with Ian Keatley kicking the visitors into a second minute 3-0 lead from a penalty.

With Kevin McLaughlin impressing on his return from injury and the backs gaining the upper hand eventually Leinster were rewarded with their first points of the evening through David Kearney who profited from an initial Devin Toner burst to gather a Fergus McFadden offload and touch down at great speed in the corner.

Isa Nacewa’s conversion attempt fell wide but he would add a penalty on the half hour mark as the Blues took an 8-3 lead into the interval.

On 49 minutes Nacewa added his second penalty of the evening before Kearney struck for his second try of the evening, this time involving Shaun Berne, Eoin O’Malley and Richardt Strauss who cleverly offloaded for the Louth man to strike.

Connacht had the final say as Dermot Murphy, Andrew Browne and Dylan Rogers teed up Eoin Griffin to nip in at the corner, but Leinster were good value for their win on a wet and windy night in Ballsbridge.