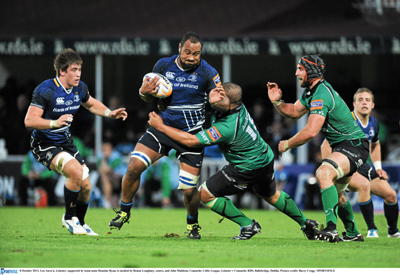 Speaking after the game Leinster scrum-half Cillian Willis said: “There was a fair wind out there and our backs were against the wall in the first half. Fair dues to Connacht because they had us under a lot of pressure at times.

“But at half-time we regrouped and clawed our way back in (to the game) and thankfully we managed to get the win.

“Games against Connacht are always frantic from the first whistle but I hope that they, like ourselves, Ulster and Munster can kick on from here because we all want all four province to be going well come the end of the season.”

Connacht out-half Niall O’Connor kicked his side into an 8th minute lead thanks to a penalty, which was balanced by an Isa Nacewa effort two minutes after the visitors prop Dylan Rogers was sent to the sin-bin for a professional foul.

O’Connor’s boot helped Connacht regain the lead in the 15th minute before Devin Toner swooped for his first Leinster try after initial good work from Ian Madigan who broke only for a ruck to form and in-form scrum-half Cillian Willis found the Ireland second row who barged over into the Northstand end of the ground.

Nacewa’s conversion attempt fell wide of the posts and Leinster held a two point advantage after a quarter of the match.

Credit to the westerners who regained the lead when Ray Ofisa broke free to score around the half hour mark only for Brian Tuohy to help himself to his side’s second try – with O’Connor adding both conversions – to give Connacht a 20-8 lead into the half time interval.

Leinster bounced back straight away after the break and Nacewa added penalties on 42 and 49 minutes before out-half Madigan slotted home a long distance penalty five metres inside his half to reduce Connacht’s advantage to three points. By the hour mark.

Then in the 64th minute the lively Luke Fitzgerald struck after Leinster won a scrum against the head. Number eight Leo Auva’a found space inside the Connacht 22 and the ball found Fitzgerald who displayed great strength to touch down.

Nacewa added the points and a further penalty in the 74th minute before Madigan stepped up with the last kick of the game and slot home a sweet drop goal high and handsome over the posts to deny the visitors a losing bonus point.