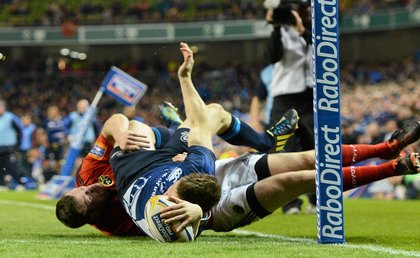 Tries from Richardt Strauss and Peter O’Mahony inside the first six minutes were the opening blows of another explosive interprovincial derby at the Aviva Stadium.

Place-kickers Jonathan Sexton and Ronan O’Gara then took centre stage, swapping a series of penalties with Leinster’s second try from Ian Madigan being the main difference at the break – 20-14.

Brian O’Driscoll needed just a sliver of space to touch down as the hosts added 10 more points before the hour mark, but Munster made them sweat late on with a final try from Conor Murray.

“I think our defence wasn’t as good as it ought to have been. We gave Munster loads of momentum and that’s something we’ll have to look at during the week to try and fix.

“(For the first try) I knew I didn’t let the ball fall. So, I just hoped that it touched the line. You know, you always have to celebrate a bit extra in those situations.”

Joe Schmidt’s men had the first sniff of the try-line in front of a noisy 46,280-strong crowd. O’Driscoll’s dinked kick forced number 8 O’Mahony to concede a five-metre scrum.

From the ensuing scrum, Leinster sprung to the left and Strauss was able to spin out of Donnacha Ryan’s tackle to score under the posts. The hooker’s outstretched effort, confirmed by television match official Marshall Kilgore, was converted by Sexton.

But Munster’s rapid response would have warmed the heart of new head coach Rob Penney. Keith Earls roared up the right wing and numbers on the left led created the space for O’Mahony to reach over in the corner.

There was a question mark over whether Mike Sherry had knocked on in the build-up to the try but the score stood, although O’Gara was unable to convert.

The early tries really opened up what is often a tight, defence-dominated derby fixture. Both sides opted to run from deep, move the ball at pace and probe for the slightest of gaps.

The scores kept coming as O’Gara sandwiched a Sexton penalty with two of his own, giving Munster an 11-10 lead heading into the second quarter.

Sexton had struck the left hand post with his second penalty effort, but as Munster began to leak successive penalties Schmidt’s charges soon regained the lead.

They pressed through the middle, the returning Eoin Reddan delivering some deft passes, before Madigan stepped inside Casey Laulala’s challenge to slip through for a neatly-taken 21st-minute try.

Sexton converted to move the Heineken Cup champions 17-11 clear, the added cohesion brought by O’Driscoll and company having a telling effect with young replacement Jordi Murphy also stepping up to the mark.

Increasing pressure on the Munster scrum gave Sexton two more shots at the posts, the second of which he landed to punish David Kilcoyne for bringing the set piece down.

Strauss infringed at a central ruck moments later, allowing O’Gara to boot the visitors back to within a converted score on the cusp of half-time.

The woodwork denied O’Gara, early in the second period, as he suffered his only penalty miss of the night. A sumptuous strike from Sexton then kickstarted a key spell from the hosts.

The direct running of Fergus McFadden and Strauss parted the Munster defence and O’Driscoll somehow scrambled his way over in the left corner. He brilliantly dotted down with his outstretched left arm despite the presence of Denis Hurley and the late-arriving Simon Zebo.

It was a real hammer blow to Munster’s chances and replacement Damien Varley, barely on the pitch, was immediately yellow carded by referee Leighton Hodges as he paid the price for his side’s repeated ruck infringements.

The conversion was added by Sexton – his sixth success from eight kicks – and Munster had a mountain to climb. Credit to the men in red though, they built for a storming final quarter hour.

As Leinster lost Isa Nacewa, O’Driscoll and Andrew Conway to injury, Munster snapped back a try as scrum half Murray lunged over unopposed following a pack drive.

O’Gara’s replacement Ian Keatley weighed in with a tremendous touchline conversion to bring it back to a nine-point deficit and suddenly it was game on again.

The Munster forwards looked re-energised, with their scrum improving and centre Laulala was denied a try by a marginal knock on call.

Both sides pushed for a late bonus point with John Cooney and Earls leading counter attacks, but the scores dried up as Leinster were left to celebrate an eighth win in their last 10 meetings with Munster.