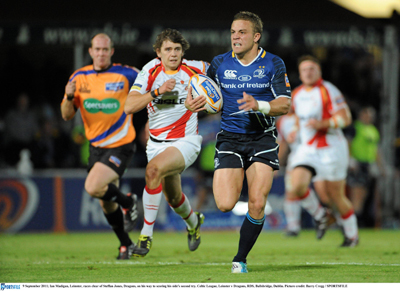 Speaking after the game, Man of the Match Isa Nacewa said: “It was hugely important that we won after our poor performance last week and we knew that we had to stand up and deliver.

“I thought that the boys were there when it counted and the challenge is now to build on that performance next week. It’s enjoyable to play in a game like that and it was significant that the flow of the game went our way.

“We’re off the bottom of the table and we knew that we’re going to face another stiff test against Glasgow next weekend.”

Leinster led 6-3 at half-time after a brace of Nacewa penalties on 6 and 30 minutes respectively, sndwiched in between a Jason Tovey strike after 11 minutes. But the hosts pulled away in the second half thanks to tries from Brendan Macken, Ian Madigan and Fionn Carr.

Man-of-the-match Nacewa kicked 14 points in all and was at the heart of Leinster’s most potent attacks alongside the likes of Carr who took his try after an impressive Leo Auva’a burst late on.

Jason Tovey scored a try, a penalty and a conversion for the Dragons who remain without a point after their opening two games of the new season.

Leinster got off to a sprightly start, Carr and David Kearney running hard at the Dragons’ defence before Nacewa clipped over a sixth-minute penalty. But it was in the second half when Leinster began to click with Carr working well for Macken’s try which involved a 40 metre sprint.

The only downside for Leinster was an injury to replacement Mat Berquist which will be assessed over the next 48 hours to determine the scale of the injury.