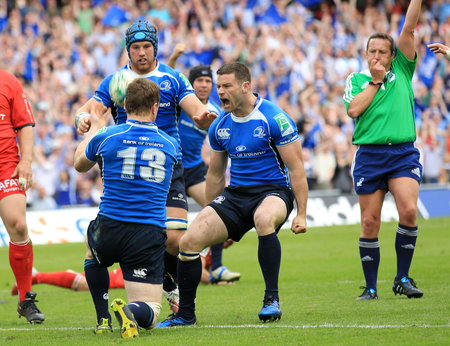 Speaking after the game Heineken Man of the Match Jamie Heaslip said: "We set our goals at the start of the season to win the competition, but credit to Toulouse who played some amazing rugby. If we're honest we know that we haven't played some of our best (rugby) yet. We knew how good they would be because they showed us last year – and we were made to work hard for the win.

"There are a lot of leaders in our team and our focus is on talking, on getting the little details right and on the next job at hand. When we got into their 22 we caused them a lot of problems, but we have to look at the video and address some of the areas we fell down on. But we're delighted to win against a quality side."

Brian O'Driscoll added: "I suppose it was an important one (try) – and I'll take the credit for falling over the line with the ball! I feel that we definitely fronted up when he needed to. We didn't play great – and we weren't at our best – but we showed great resolve and we know that we haven't won anything yet.

"We shouldn't be allowing silly tries like that (first try) and we have to make sure that that doesn't happen again.

"(Relevance from last year's defeat?) Sometimes you have to learn from defeats in the past, but in the semi final stage it's all about getting over the line and we're delighted that we managed that."

Florian Fritz profited from a fortunate bounce of the ball off the upright from a David Skrela penalty to score Toulouse's fifth-minute opener, with Leinster using their forward power to set up a 31st-minute reply from Jamie Heaslip who started and finished the move after a wonderful spell of forward pressure.

In between both tires Jonathan Sexton added penalties on 9 and 13 minutes respectively – the second a result of excellent work by Sean O'Brien.

The hosts edged into a 16-13 half-time lead courtesy of Sexton's injury-time penalty, but Louis Picamoles barrelled over for Toulouse's second try in the 43rd minute, with Skrela converting, to make it 16-20 to the reigning champions.

Leinster used their bench intelligently and Sexton's place-kicking was assured, moving them back ahead until O'Driscoll struck  after some excellent initial work from Mike Ross, Sexton and then Isaac Boss who provided the assist and, although replacement Nicolas Bezy in the 75th minute kicked Toulouse to within six points, Sexton had the final say.