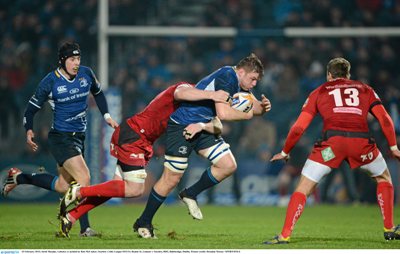 Ian Madigan pulled the strings for Leinster in the second half as they recorded their third straight victory over the Scarlets, gaining revenge for September’s heavy round 1 defeat in the processs.

Madigan was involved in Leinster’s most potent attacks as they scored 21 unanswered points after the break, with the replacement out-half converting tries from Aaron Dundon, Jordi Murphy and John Cooney.

Andrew Goodman did the all scoring in the opening 40 minutes for Leinster, his try and two penalties guiding them to a 11-5 lead at the break.

Andy Fenby swooped for a Scarlets try in the 35th minute but they were overrun by the in-form hosts with turnovers proving costly for the Welsh region.

The first quarter was pockmarked by penalties but both sides showed an eagerness to attack from deep and put the ball through hands.

Leinster edged ahead in the third minute with New Zealander Goodman, assuming the kicking duties before Madigan’s introduction from the bench, planting a penalty through the posts.

The Scarlets’ young half-backs Owen Williams and Aled Davies probed for openings off the fringes of rucks, however Leinster were alive to the danger.

The visitors were reduced to 14 men after lock George Earle was carded for dangerous play at a lineout. Goodman though was unable to convert the resulting left-sided penalty. Williams also sent a penalty chance wide just past the midway point of the half.

Simon Easterby’s men boxed clever while Earle was off the pitch, keeping their defensive line intact apart from a Fionn Carr and Dominic Ryan-inspired surge.

Leinster began to build some momentum after a direct run from number 8 Murphy. A clever backhanded pass from Isaac Boss released Dave Kearney and their combined efforts led to Goodman’s second three-pointer of the night.

The Kiwi then opened his try account for the province, swatting away Williams’ attempted tackle to finish a cracking effort in the right corner.

The pace and distribution skills of Carr, Kearney and Andrew Conway were to the fore in the build-up, with Goodman unable to convert from the touchline.

The Scarlets hit back straight from the restart, retrieving possession and hunting out to the left where Aaron Shingler and Aled Thomas combined to put Fenby streaking over in the corner.

Leinster used their lineout maul to good effect on the restart, a facet of the game that served them so well against Benetton Treviso last time out. Captain Leo Cullen was hugely influential in the engine room alongside the tireless Ben Marshall.

A Shane Jennings drive to the line was ruled inconclusive by television match official Dermot Moloney, however hooker and man-of-the-match Dundon piled over from a similar attack soon after.

Madigan converted to put 13 points between the sides and just as the game seemed to be petering out, the Ireland hopeful inspired Leinster’s late bonus point push.

With ten minutes left, Murphy took a great line onto a crisp pass from Cooney to score to the left of the posts with Madigan adding the extras.

With time almost up, Leinster turned defence into attack as Madigan and Fergus McFadden drove them on and replacement scrum half Cooney sniped over from a close-in ruck to confirm the bonus point.