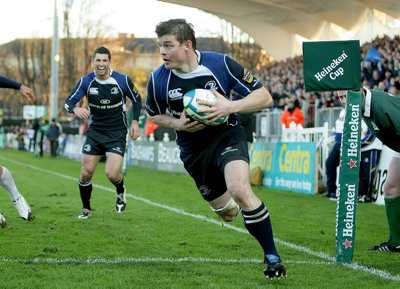 Speaking after the match Heineken Man of the Match Devin Toner said: “There were a couple of occasions when we were guilty of not taking our opportunities, but we took our points in the first half and scored our tries in the second.

“I’ve learned a lot from Malcolm O’Kelly and Leo Cullen and I’m just happy to get my chance because there’s a lot of competition with Trevor Hogan there as well. I think they’ll be very tough to face away from home because they’re a very proud team and we know that they will come out all guns blazing.

“There’s a good feeling in the dressing room, but we’ll regroup on Monday and get our minds focused on a very tough game next Friday.”

The Magners League holders dominated possession and were just 9-0 up at half-time through three Jonathan Sexton penalties.

Leinster landed their first try soon after the break through hooker Bernard Jackman and Brian O’Driscoll got in for the second try in the 66th minute.