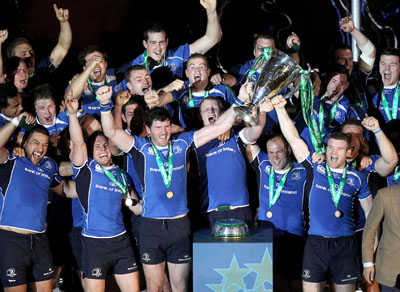 Out-half Jonathan Sexton took on the mantle of man-of-the-match, showing great poise and scoring ability as Leinster came from 22-6 down at half-time.

His 28 points were founded on some excellent build-up work from his team-mates, with the likes of Brian O'Driscoll, Eoin Reddan, Nathan Hines and Sean O'Brien helping Joe Schmidt's men get on top in a high-intensity second half.

Hines crossed for a deserved try, Leinster's third, just past the hour mark which gave them a 33-22 buffer and a shellshocked Northampton team were unable to respond.

The victory marks Leinster's second European title and the fourth Irish win in the last six years. There is added significance in the fact that Connacht have now qualified for next season's Heineken Cup by virtue of their provincial colleagues' success in Cardiff.

There was a great atmosphere in the Millennium Stadium as these two former tournament winners locked horns in an Anglo-Irish decider.

Sexton got Leinster off the mark with a 14th minute penalty, rewarding Jamie Heaslip and O'Brien for some good foraging in midfield.

Stephen Myler punished a scrum infringement to make it 10-3 to Northampton, before a Shane Horgan and O'Brien-inspired break almost led to a try for O'Driscoll. A well-timed tackle from Ben Foden denied the Ireland captain.

Northampton prop Brian Mujati was sin-binned for pulling Cian Healy back off the ball, but the English side had the upper hand in the scrum – they won one against the head in Leinster's 22 and full-back Foden managed to score out wide.

Myler added the extras and although Sexton landed his second penalty, Saints had the final say of the first half when captain Dylan Hartley wrestled his way over from close range.

16 points adrift at the break, Leinster had to regroup quickly and come out firing in the second half. They did just that, tearing into Saints on the resumption. Four minutes in, O'Driscoll made the initial incision for Sexton to dart over on the right for a seven-pointer.

Television match official Giulio De Santis then ruled that Gordon D'Arcy had been held up, but just moments later Heaslip set up Sexton for his second converted try – this time closer to the posts.

The Leinster players and fans were visibly lifted by these scores as they upped the intensity and began to dominate in the set piece and the loose. After a powerful scrum from his forwards, Sexton's 57th-minute penalty edged the men in blue ahead for the first time at 23-22.

The momentum was clearly with Leo Cullen and his team-mates now. Dowson was promptly sin-binned for infringing close to his try-line and Sexton converted the resulting penalty.

Maintaining their push for more tries, Hines started a breathtaking move involving backs and forwards which ended with the Scotland lock driving over for Leinster's third touchdown.

There was some superb support play from Richardt Strauss and Cullen in the build-up, and Sexton tagged on the conversion for a 33-22 scoreline.

Sexton was off target with a penalty from distance and further try-scoring chances were missed but Leinster, with all of their replacements on the pitch, held their dominance right to the final whistle.