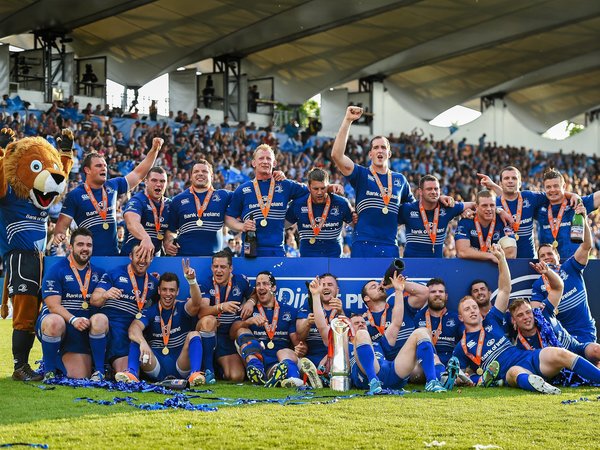 Four-try Leinster overcame the early departure of Brian O'Driscoll to beat Glasgow and become the first ever team to retain the RaboDirect PRO12 title.

A suspected calf injury forced O'Driscoll off barely eight minutes into his 186th and final appearance for Leinster, but the retiring centre still managed to end his provincial career with silverware – just as he did with Ireland in March.

First-time finalists Glasgow were far from overawed at the RDS, four finely-struck penalties from Finn Russell meaning they were only 14-12 behind at half-time.

Springbok Zane Kirchner crossed for Leinster's opening try in the 16th minute and his pass sent Shane Jennings through for the second late in the first half.

The defending champions strangled the life out of Glasgow, particularly in the final quarter, with man-of-the-match Sean Cronin and Rhys Ruddock leading the charge up front.

Two Jimmy Gopperth penalties made it 20-12 by the 66th minute and the final gloss was added by late tries from Kirchner and Gordon D'Arcy.

Leinster's long-serving captain Leo Cullen, who is moving upstairs as their new forwards coach, also came off the bench to help the Blues make it seven major trophy wins in as many years – three Heineken Cups, one Amlin Challenge Cup and three league titles (2008, 2013 and 2014).

The retiring Brian O'Driscoll told RTÉ afterwards: "I've always said you can't plan anything in this game. What happens happens and you've got to roll with the punches.

"It wasn't going to be a good day for me today, only getting eight minutes or whatever but (winning) is what it's all about."

Asked what he will miss most from the game, he replied: "Hanging out with all your buddies and having a laugh, coming in every day and making sure that you're well equipped with your abuse because you know there is some coming at you!

"I'll miss that and the support that we've had. It's been a two-way relationship. We've generated them but they've been great for us."

Giving his reaction, Leinster's captain on the day Jamie Heaslip said: "Just like Ulster in the semi-final, it was a massive squad effort there. The guys came off the bench in that last 20 minutes when it was still touch and go, and made a massive impact…upped it a level.

"Glasgow are an unbelievably tough side to go up against. I'm absolutely shattered after that and so are the rest of the boys. The 'long goodbye' is finally over and we can send the two boys off with a few drinks!

"It's great to send the two boys off (with the title) and also the squad members who aren't here today. I'm just delighted for everyone involved and everyone that's supported us."

Glasgow were bidding to become the first Scottish winners of the PRO12 and unsettled the hosts straight away, their young out-half Russell blocking down Gopperth in the first minute.

The 22-year-old landed a long range penalty soon after and Leinster emerged pointless from their first visit to the Scots' 22, knocking on after turning down a kickable three-pointer.

Russell then punished Mike McCarthy's high tackle with a superb strike from the left wing that went over off the right hand post.

But Leinster's patience was rewarded on the quarter hour mark, building pressure through 20-plus phases before Rob Kearney released winger Kirchner to finish in the left corner. Gopperth nailed the conversion for a 7-6 advantage.

The high pace continued into the second quarter with both defences tested in the sun-kissed conditions.

Tellingly, Kirchner turned creator in the 38th minute as he breezed through a midfield gap and Jennings was on his shoulder to run in a converted try from 25 metres out.

There was still time for Russell to make it a two-point game, drilling home a late penalty from just inside the Leinster half.

The hosts were denied a third try on the resumption, referee Nigel Owens ruling that Cian Healy had been tackled before getting up to reach for the try-line.

Gopperth hit an upright with a penalty attempt from distance and Glasgow showed their offloading ability as replacement Niko Matawalu sparked their attack into life.

As bodies tired, Matawalu crucially lost the ball forward as he lunged for the Leinster line and a Gopperth-inspired counter almost led to Madigan scoring from his own kick through.

A powerful close-in scrum – with Healy in dominant form – allowed Gopperth stretch Leinster's lead to 17-12 and their greater experience began to tell as Gopperth widened the margin to eight points, with Nakarawa infringing at a ruck.

Glasgow's brave challenge was petering out as Gopperth missed a drop goal and a thundering charge from influential hooker Cronin should have garnered a try.

The victory was duly wrapped up by Kirchner's second touchdown in the 74th minute, a crisp passing move allowing D'Arcy to break free and send the South African over.

The roles were reversed just two minutes later as Leinster profited from turnover ball and Kirchner set up the tireless D'Arcy to go over in the same left corner. Gopperth brilliantly converted both scores from wide out to complete his 14-point haul. 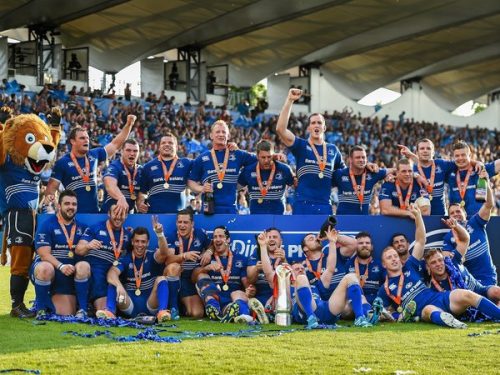