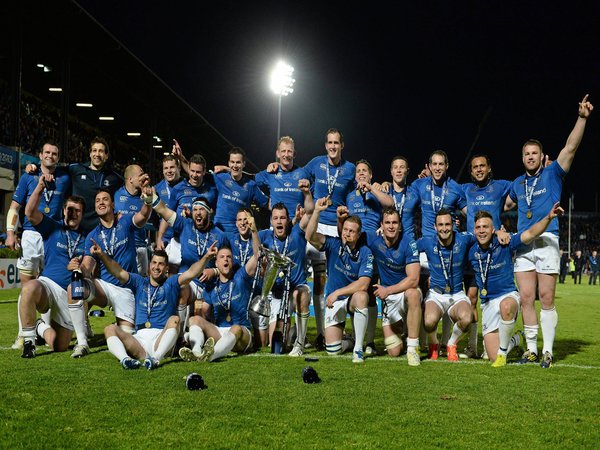 Man-of-the-match Jonathan Sexton led the province to the first leg of a possible league and European double, with the RaboDirect PRO12 final to come next week.

Joe Schmidt’s men produced a first half performance of clinical efficiency, the fruits of it being a trio of converted tries from Ian Madigan, Sean Cronin and Rob Kearney.

Stade Francais were unable to transfer a 69% share of possession into points, although Jérome Porical’s second successful penalty cut the gap to 21-6 by half-time.

Sexton’s right boot kept the scoreboard ticking over with a brace of penalties around the hour mark, which were replied to by a well-taken Jérémy Sinzelle try.

But fittingly Leinster, oozing class off limited ball, reeled off a final try when replacement Cian Healy bulldozed his way over with just a minute left.

In adding the Challenge Cup trophy their three recent Heineken Cup triumphs, Leinster have also given a boost to Connacht whose Heineken Cup place is secure for next season.

Speaking afterwards, Leinster head coach Joe Schmidt said: “We still have one game to play and we will do our best next Saturday (against Ulster), because there is something that has eluded us in recent seasons. We have won European titles but lost league finals and not been able to double up.

“This is a trophy we have wanted and for 20-odd hours we will hold both European trophies and that is special. We have won three titles in three years and if you had said that to me at the start of the season I would have taken it with both hands.

“Maybe at times they lacked precision and maybe that helped with the win, but I have massive pride in the young guns coming through.

“Even for those who have been there and done that, the young boys are pushing them really hard and that is great for the future.”

Leinster sliced opened the Stade defence inside the opening three minutes, Isaac Boss’ inviting inside pass sending Isa Nacewa through a gap and Sexton and Madigan were up in support to finish off the move under the posts.

Sexton converted to break through the 1,000-point barrier in Leinster colours, handing the hosts the ideal start in the Dublin evening sunshine.

Stade’s forwards built a platform for a strong response. David Lyons and captain Sergio Parisse combined to force a turnover and Nacewa had to be on his toes to keep Jules Plisson out.

As the pace quickened, Stade showed good poise in possession with both sides determined to play with width and exploit any space.

Excellent defence from Sean O’Brien and Sexton held Paul Williams up as Stade attacked off a close-in lineout, but Leinster’s ability to strike from first phase ball was soon evident again.

Despite exerting a good deal of pressure, Stade’s vulnerability in defence was ruthlessly exposed once more when Boss clipped an intelligent kick over the top, Andrew Conway beat Julien Dupuy to the ball and passed swiftly for the supporting Cronin to charge in behind the posts.

Sexton’s simple conversion was answered to by Porical’s opening penalty, just reward for some strong carrying around the fringes from the likes of Parisse and former Trinity College captain Scott LaValla.

However, another high quality attack set up try number three for the home side. Nacewa collected Sexton’s kick out to the left and he sent full-back Kearney diving over in the corner.

Sexton added the extras from wide out, making it three converted tries from as many attacks in the Stade 22. Porical landed a long range penalty in injury-time to close out the first half’s scoring.

The introduction of ex-Munster man Paul Warwick helped Stade make a lively start to the second period, although Leinster continued to make the greater yardage when in possession.

Sexton knocked a left-sided penalty through the posts to keep his home province on course, with the hard-working Jack McGrath making way for Healy as the hour mark approached.

Handing errors blighted Stade’s attempts to strike in the Leinster 22 and with Healy forcing a scrum penalty, Sexton launched over another three points in the 63rd minute.

Within three minutes, Stade had hit back with their only try of the night. Hugo Bonneval put fellow winger Sinzelle over in the right corner, having drawn in two defenders in impressive fashion.

Plisson landed the conversion to reduce the arrears to 14 points before Leinster went close to claiming a fourth try, with Kearney denied by a foot in touch during a sparkling solo raid up the left.

However, there was no doubt about Healy’s powerful burst from close range and lunge for the line, the Lions tourist sealing a very satisfying victory for the hosts.

Sexton converted to finish with a 14-point personal haul, and the influential out-half had the honour of receiving the trophy alongside the retiring Nacewa at the presentation afterwards. 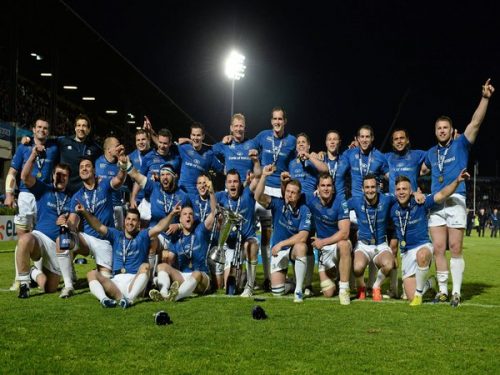