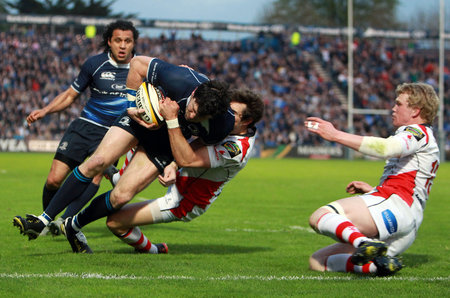 Speaking after the game, Shane Jennings said: “It was good from the perspective of getting the bonus point, but there were some defensive errors on our part that we’ll have to tighten up on.

“It was a strange game. I felt our set-piece was good overall but we weren’t as strong defensively.

“It was good to get back (after the injury lay-off) because it had been a frustrating last couple of weeks, personally speaking. It was good though to see the team do so well over that time.

“We have an exciting few weeks ahead, but our concentration is on Aironi next week.”

Leinster began with a flourish and Richardt Strauss crashed over as the sizable support were still taking their seats when he gathered a wonderful Eoin O’Malley scoop from the ground after a clever Jonathan Sexton kick ahead.

Though Ian Humphreys reduced the deficit with a 6th minute penalty, soon Leinster scored their second try when Sexton found Nacewa whose offload found the onrushing Luke Fitzgerald who raced clear to score.

On 13 minutes Shane Horgan added to his impressive try-scoring tally when Isaac Boss instigated a move – on his 100th league appearance – which found the impressive Fergus McFadden whose looping pass found Boyne man Horgan who powered over the line.

Sexton added the difficult conversion to give Leinster a 17-3 lead.

Humphreys added penalties on 19 and 27 minutes, but Sexton’s second successful kick of the night gave the Blues an eight point advantage. Then in the 36th minute prop Heinke van der Merwe sent the majority of the 17,670 strong crowd into delirium when he secured the bonus point try after some good foward play, namely by the towering Leo Cullen and the hugely effective Shane Jennings.

Sexton’s conversion gave the hosts a 27-12 half-time lead, with Ruan Pienaar adding a penalty on the stroke of the interval.

Horgan began the second half where he left off and he expertly gathered his own chip ahead after some excellent work by O’Malley and Nacewa and Sexton’s conversion made it 34-12.

But second half tries from Pedrie Wannenburg (53 minutes) and Craig Gilroy (75 minutes), with Pienaar adding the extras on both occasions – kept Ulster within a point of a losing bonus point. Leinster held on, though, to secure a satisfying win.