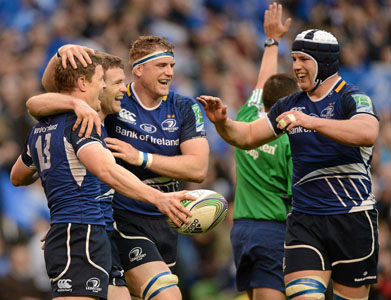 Isa Nacewa, Rob Kearney (2) and Brian O’Driscoll ran in tries which were all converted by Jonathan Sexton, who ended the evening with a kicking haul of 14 points.

Leinster were in firm control of this quarter-final tie by half-time having established a 27-3 advantage, roared on by a 50,340-strong crowd.

Joe Schmidt’s men added a fourth try through Kearney seven minutes into the second half, and the province’s head coach will probably be most pleased by the fact that Cardiff were kept tryless despite their improved display after the break.

Speaking after the game, Cian Healy said: “We are happy with how that went. We’re happy with some parts of the game but we didn’t really put our foot down in the second half.

“We’ll look at that and look to improve how we finish a game. There are a lot of good sides out there and we’ll keep our heads down and work hard and stick to what we want to achieve going forward.”

The loosehead prop added: “We were pretty happy with scrum and we had a couple of meetings as a front row about what we wanted to do.”

Cardiff took a third minute lead after Leigh Halfpenny, who sustained an early bloodied nose, thumped a 46-metre through the posts.

A leg-pumping scrum settled Leinster into this battle of the Blues and Sexton landed a left-sided penalty to level the sides in the eighth minute.

His opposite number Dan Parks missed a drop goal attempt as Cardiff tried to respond, with two high catches from Kearney delighting the vocal home support.

Leinster really hit their stride in the lead-up to their opening try with Healy barrelling forward, and a neat interchange between a dummying Sexton and Kearney sent Nacewa over to the right of the posts.

Sexton converted the winger’s try for a 10-3 lead and the growing influence of Leinster’s superior scrum, with Mike Ross to the fore, yielded a kickable penalty which the home out-half slid wide.

Sexton was back on target in the 23rd minute, punishing a lineout infringement from Bradley Davies, and the province drew further confidence from attacking runs by Luke Fitzgerald and Nacewa.

Fitzgerald was sprung forward off another strong scrum from the hosts, with Gordon D’Arcy wriggling his way through and Eoin Reddan released for a dart into the 22.

The Blues could not hold out as quick ball from Richardt Strauss saw Kearney expose some poor defending and round in behind the posts for a 30th minute try.

Sexton added the extras and Leinster crossed the whitewash again just four minutes later. They attacked off a Leo Cullen-won lineout with Sexton’s well-timed inside pass putting Fitzgerald through a gap and he sent O’Driscoll over unchallenged for a seven-pointer.

It was a reward for the hard graft of Kevin McLaughlin, Cullen, Heineken Cup debutant Brad Thorn and Strauss up front who continually laid the platform for quick ball.

Into the second half, Healy caught Michael Paterson with a thunderous tackle and won a penalty near halfway as Leinster extinguished some early fire from the Blues.

Schmidt’s charges quickly turned defence into attack, Nacewa tiptoeing along the right wing before Strauss and Healy were held up. The ball was retained and two terrific passes from Reddan and O’Driscoll opened the way for Kearney to touch down.

Sexton’s conversion nipped in off the right hand post to make it 34-3 and Cardiff were struggling to gain any foothold in the game.

But the hard-working Halfpenny and Casey Lauala continued to probe for the visitors with Gethin Jenkins and Martyn Williams led by example up front.

Veteran flanker Williams was inches away from scoring a 65th minute try, a last-gasp challenge from Jamie Heaslip forcing him to lose control of the ball as he lunged over the line.

A lung-bursting break from Sean O’Brien got Leinster on the move again after Cardiff had dominated possession and territory during the middle part of the half.

The Welsh region lacked the firepower to breach Leinster’s determined defence and the home side hunted for a late fifth try, with replacements Sean Cronin and Nathan White almost engineering it during a lively break.

Kearney and Nacewa punched holes late on and as Cardiff were marched back towards their line, a deliberate infringement from Tom James saw the winger yellow carded in the 79th minute.

Leinster ran out of time in their hunt for another try, but they were very convincing winners on a day when Brian O’Driscoll scored his 31st Heineken Cup try, leaving him one short of record holder Vincent Clerc of Toulouse.