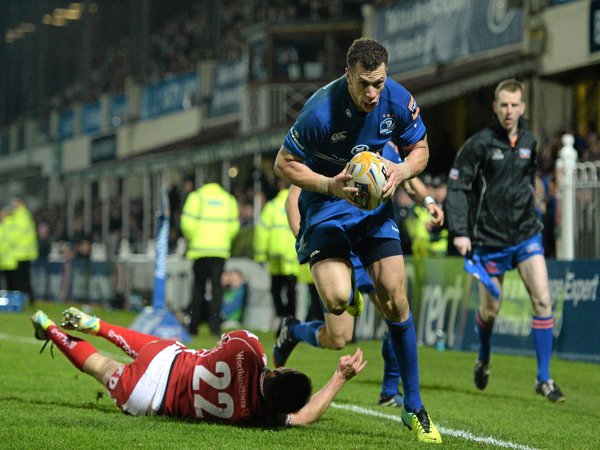 The province's head coach Matt O'Connor reintegrated a number of their international players and a very efficient first half hour at the RDS yielded three tries – one each for Brendan Macken and Jack McGrath as well as a penalty try.

The Scarlets ate into the 22-0 half-time deficit with an opportunist score from Gareth Davies and Gareth Maule added another by the hour mark.

But Leinster made sure of the bonus point with tries from Eoin Reddan and man-of-the-match Zane Kirchner before a late consolation effort from Scarlets centre Adam Warren.

Speaking afterwards, Zane Kirchner said: "We let it slip a bit in the second half. We almost allowed them back into the game.

"The guys kept composed and the way we worked through it was good. We got the four or five tries with the bonus point, so it's a good result.

"In any game your start is quite vital and I think the way we started tonight was good because the result was all we were after and I think everything played out quite well.

"There were a lot of tired legs out there in the last 10-20 minutes. The way we finished, especially (conceding) the last try, it's not always the way you want to finish…but the result, at the end of the day, is there. So we can work off a positive for this week coming."

The Scarlets were first to threaten, with half-backs Aled Thomas and Gareth Davies leading them through a mammoth set of phases as they edged towards the home try-line.

But Leinster held them at bay and a smart run and kick downfield from captain Shane Jennings got his side firing, with an eighth minute penalty slotted home by Ian Madigan.

A freshly shorn Kirchner added some zip to an attack on the left before centre Macken evaded Warren's grasp in midfield and darted over in the right corner. Madigan was unable to convert.

Kirchner was eager to impress on his first home start, dummying and linking superbly with Madigan to create another opening for Macken.

The South African was denied his first try for the province just moments later. Scarlets centre Maule did really well to get his hand under the ball – with support from Nick Reynolds – as Kirchner went for the line.

Television match official Kevin Beggs ruled that the ball had been held up, but from the resulting five-metre scrum Leinster forced a couple of penalties and the third collapse led to the awarding of a penalty try.

After Madigan's conversion, the Scarlets looked set to hit back immediately as scrum half Davies raided through but his pass to the supporting John Barclay was adjudged forward.

Injuries to Martin Moore and Gareth Owen briefly broke up the game's momentum, however the Scarlets were now struggling and Leinster's power up front ground them down again with prop McGrath piling over under the posts.

Madigan added the extras once more before Simon Easterby's charges forced the issue approaching the interval.

Frazier Climo and Thomas ran out of space in the right corner and although Leo Cullen was sin-binned for three penalties on the trot, the Llanelli pack were unable to convert a late spell of pressure into points.

The visitors – with a reinforced front row containing Romanian international Horatiu Pungea – pressed for an elusive try and they got their reward seven minutes into the second period.

Scrum half Davies profited from a Jennings knock on as he scooped up a breaking ball and his momentum took him past Madigan and Reddan to score in the left corner.

Thomas sent the conversion to the left and wide and the Scarlets suffered a setback soon after as number 8 Sione Timani saw yellow for a foot trip on Lote Tuqiri.

Reynolds did well to tackle his opposite number Luke Fitzgerald into touch to deny Leinster a fourth try and the visitors made it a 10-point game with a terrific breakaway effort.

Barclay scrapped for a ruck ball and Jordan Williams and Warren spearheaded a fine counter attack which ended with Gareth Davies providing the try-scoring pass for Maule who injured himself as he grounded the ball.

After Thomas supplied the extras and Maule was taken off, Leinster made sure to score before Timani's return. Sean Cronin's barnstorming run got the hosts into position and Reddan plunged over from a close range ruck, with Madigan sweeping home the touchline conversion.

There was still time for replacement Jimmy Gopperth to break down the left and set up Kirchner for a comfortable finish in the corner, before the Welsh region – aided by Macken's sin-binning for a high tackle – had the final say as Warren evaded Tuqiri's clutches in injury-time. 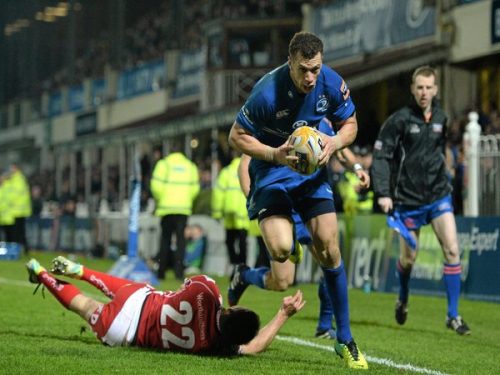