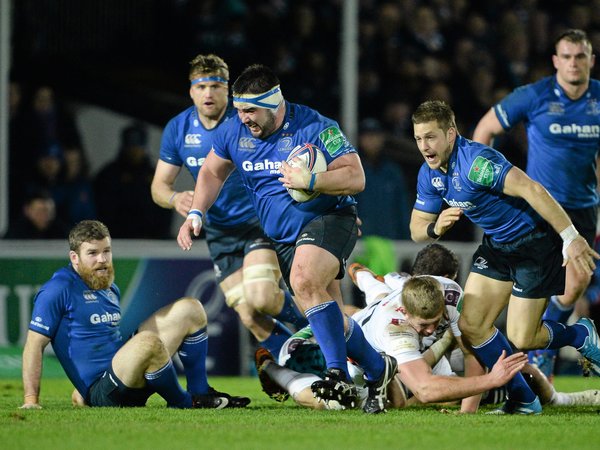 Leinster’s bonus point victory over the 14-man Ospreys at the RDS confirmed their place in the Heineken Cup quarter-finals, with the province advancing as Pool 1 winners…Cian Healy post-match reaction…

Wales lock Ian Evans was sent-off for reckless use of the boot in the 20th minute, and the Ospreys also had to cope with first half injuries to Ben John and Ryan Jones.

Jimmy Gopperth and Dan Biggar swapped penalties in the first 13 minutes, the visitors keeping edgy Leinster at bay until a penalty try and a Cian Healy score approaching half-time.

It was far from vintage stuff from Matt O'Connor's men, who were error-strewn at times, and they finally added to their 17-3 lead with a penalty try just past the hour mark.

Leinster's round 6 efforts leave them in home quarter-final territory as things stand, but a Dublin date is likely to slip from their grasp by the end of the weekend.

Speaking after the game, man-of-the-match Cian Healy said: "It was pretty good, we had to stick to our guns. It was a slow game, trying to piece things together was tough enough but we stuck to what Matty told us and pulled it off nicely at the end.

"We are plugging way, working on getting what we want. It has happened to us in seasons before where we are going away and winning and not playing our best rugby.

"But then it takes time for that to click and we don't really want that clicking at the start of the season, we want to work on it and it comes right at the right time of the season.

"We believe in what we can do. Obviously it would be great to be in Dublin (for a quarter-final) with the home support and all, but we will go anywhere and play anywhere."

The accurate kicking of scrum halves Eoin Reddan and Rhys Webb was an early feature, as both sides went the aerial route.

Amid some crunching hits, Healy bore a hole in the Ospreys defence and a strong Leinster scrum was rewarded by three points from Gopperth’s boot.

Already hampered by injuries in the back-line, the Ospreys lost the services of centre John but gritty work at the breakdown allowed Biggar to level matters – with the aid of the crossbar.

Aisea Natoga’s smart break was foiled by Gopperth’s penalty-winning contribution at the ensuing ruck, although the Welsh region continued to look nothing a team lying bottom of the pool.

Their task grew significantly harder when Evans was picked out by referee Romain Poite and TMO Laurent Valin for stamping on Mike McCarthy on the ground as the Ospreys mauled forward.

The match officials agreed there was deliberate contact with McCarthy's head and the red card was produced, with the bloodied Leinster lock having to be replaced.

It was a real dog-fight up front and Leinster struggled to make their numerical advantage count as the Ospreys – despite also having to replace the influential Jones – battled for every ball.

That was until the 33rd minute when a monster lineout maul was collapsed illegally near the Ospreys line and Poite awarded a penalty try which Gopperth converted.

Jeff Hassler then got back to deny the New Zealander, positioning his leg so that Gopperth was unable to touch down under the posts following an eye-catching Martin Moore run.

But Leinster did register their second try before the break, the defensive workload taking its toll on the visitors as electric prop Healy muscled over from close range.

Leinster’s hunt for more tries stuttered as a Dave Kearney effort was cancelled out for a knock-on and handling errors ruined a couple of Luke Fitzgerald-inspired attacks.

The scrum became a factor again upon Marc Thomas’ introduction and Ryan Bevington’s move to hooker, and Leinster used to the set piece to earn their second penalty try – Webb deliberately infringing as the home pack powered up to the line.

The third try of the night was converted by Gopperth and his half-back partner Reddan just lost control of possession – under pressure from Matthew Morgan – as Leinster hunted for the fourth.

It arrived with eight minutes left as Boss’ short feed was finished off by young back rower Murphy for his second try in as many European games, and Boss then gobbled up Fitzgerald’s inviting pass for the fifth.

Murphy, Brian O'Driscoll, Boss and Ian Madigan all had a few bites at the cherry for a sixth try, however a couple of knock-ons let the overworked Ospreys off the hook.

Take a look at some of the best photos from Leinster's win over Ospreys. 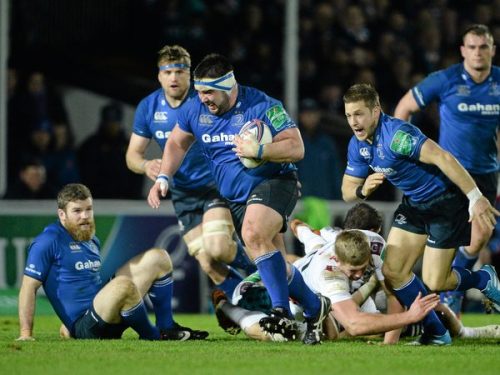