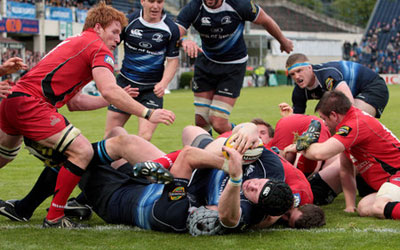 Speaking after the game Cian Healy said: "It was a very fast game and a real test of our fitness levels but we’re delighted to get the win considering the quality of the opposition and the physicality that they showed.

"The focus all week was on minimising our mistakes and there was a big improvement. It was a tough game overall and we’re pleased even though we know that there’s more room for improvement.

"Credit to Isa who I thought played really well considering he was only told something like 20 minutes before the game that he was starting at out-half. He stepped up to the mark and he really showed his quality again."

It was a sluggish start by the hosts who fell behind to an early 14-0 deficit after tries from Jim Thompson and Mark Robertson on 24 and 29 minutes respectively. With Phil Godman slotting home both conversions it prompted Leinster into action and the impressive Cian Healy powered his way over for Leinster’s opening try, which Isa Nacewa converted, to reduce the arrears in half.

A Nacewa penalty on the stroke of half time left Edinburgh leading 14-10 into the interval and soon after the break Leinster roared into the lead thanks to a well executed Shane Horgan try after a surging Nacewa break into the North Stand end of the ground.

Nacewa, a late positional replacement at out-half for Shaun Berne who suffered a niggle in the warm up, slotted home the conversion to push the hosts into the lead for the first time and he further extended the advantage to six points with a 58th minute penalty.

Credit to Edinburgh who scored two tries in three minutes through Geoff Cross and Robertson who bagged his second try in the 70th minute. With the bonus point secured Leinster looked in real danger, but Nacewa struck another 74th minute penalty before substitute Stephen Keogh levelled the scores at 28-28 with a try as the game entered the closing stages.

Nacewa stepped up to again slot home his sixth successful kick on the bounce before he got the chance to add a magical seventh strike after Rob Kearney capitalised on a clever piece of thinking in the Leinster backline to sprint clear and touch down, sending the home supporters into delirium.