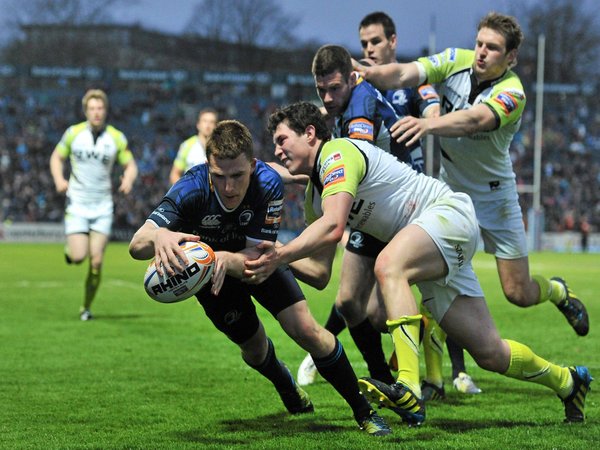 The Welsh region stunned the home support when they won a dramatic final at the RDS last May, but they were unable to repeat the feat on a rain-soaked night in Dublin.

A brace of Andrew Conway tries catapulted Joe Schmidt’s men into a 14-0 lead, but Dan Biggar and Ben John replied as the Ospreys cut the gap to two points.

Jonathan Sexton landed an injury-time penalty to give the hosts a 17-12 interval lead, and Conway’s hat-trick score further strengthened their hand.

Sexton popped over two more penalties, either side of a Tom Isaacs try, before Cian Healy came off the bench to run in the province’s fourth touchdown late on.

Having lost the last three league deciders, Leinster have unfinished business with the PRO12 play-offs and they will entertain third-placed Glasgow Warriors at the RDS next Saturday night (kick-off 7.35pm).

Speaking afterwards, head coach Joe Schmidt said: “We’re really happy to get the home semi-final. That was our target. We knew the Ospreys, who still had a lot to play for, would chase the win and maybe a couple of tries in the second half.

“We had to start really well in the second half and thankfully enough Andrew Conway got his third try. We missed a couple of tackles that we should have made and that’s always a disappointment – there’s things we need to work on.

“We’ve got massive respect for Glasgow, they’ve probably been the form team of the second half of the season. We were lucky to beat them here in March (22-17), it was nip and tuck that night. There was nothing in it really.”

The Ospreys needed to produce the goods and get a victory here to stay in the play-off reckoning, hoping also that Benetton Treviso would defeat the Scarlets in Llanelli.

The hectic early pace of this round 22 tie suited Leinster’s debutant scrum half Luke McGrath, the 20-year-old starting in place of the injured Isaac Boss (calf).

A break from his half-back partner Sexton sliced open the Ospreys midfield, while the visitors countered smartly – although Biggar missed his first kick at the posts.

It fell to Conway to open the scoring in the seventh minute. The covering Ross Jones allowed Fergus McFadden’s kick ahead to go through his legs and Conway grabbed the bouncing ball to touch down.

Sexton sent the tricky conversion over from the right and the Ospreys soon suffered a further setback. Rhys Webb injured his left leg and had to be helped off, with Jonathan Spratt introduced and Tom Habberfield moving to scrum half.

Quick hands collectively and an inviting kick forward from Ian Madigan landed Leinster back in the Ospreys 22, with the high tempo continuing.

Luke McGrath conjured up a second try for Conway, giving two Ospreys forwards the slip at a lineout and passing brilliantly out of a tackle to hand the winger a comfortable run-in.

Sexton added the extras for a 14-0 scoreline, but Steve Tandy’s side raised their game approaching half-time. Biggar’s grubber kick was too strong as Joe Bearman lurked near the right corner.

However, with the Ospreys building definite momentum, Biggar took a quick tap some minutes later and his surge from close range resulted in an opportunist try that he also converted.

Three minutes before the break, Habberfield’s neat turn of pace got the Ospreys back into scoring range and with the Leinster defence sucked in, a spread of passes to the right led to Bearman sending John over in the corner.

Biggar’s conversion attempt narrowly missed the posts to the left and Sexton, who was winded when attempting to stop John’s try, recovered to boot an injury-time penalty.

Steady rain fell for the start of the second period and Conway wasted little time in registering his third try of this open-natured encounter.

The former Ireland Under-20 international reached over in the right corner having chipped over the top and beaten direct rival Ross Jones for pace and strength.

Sexton’s conversion went over with the aid of the left hand upright, moving the home side into a double scores advantage.

Adam Jones, one of a number of Lions on show, was penalised for a scrum offence that saw Sexton kick Leinster 15 points clear.

The Ospreys responded in the final quarter, Alun Wyn Jones leading their pack as they pressed from a close-in scrum and a series of rucks. Ashley Beck then spun out of a tackle to score by the posts, only to be whistled up for a forward pass from Biggar.

Their second try did arrive in the 72nd minute as Beck’s well-directed long pass teed up replacement Isaacs for a simple finish out wide on the left.

Biggar converted to put eight points between the sides, yet Leinster finished strongly as Sexton topped off his 15-point tally and prop Healy displayed impressive pace to score after scooping up a breaking ball. 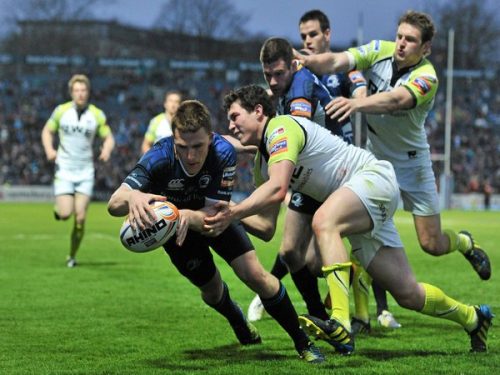