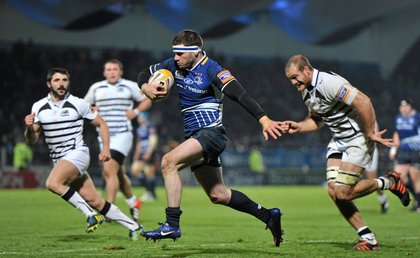 Andrew Conway and Jonathan Sexton touched down in the first half at the RDS, Fergus McFadden’s brace followed after the break and Cian Healy also crossed having been sprung from the bench.

Speaking afterwards, Leinster head coach Joe Schmidt said: “To be honest, the match did go to plan. We wanted to come away with a good win. The bonus point is exactly that, it’s a bonus.

“We wanted to ensure that we got four points, reintegrated a few guys and at the same time, not get injuries. There’s no visible injuries…everyone is pretty much on their feet and walking around.”

He added: “Sean (O’Brien) was only ever going to play 40 minutes anyway, he and Johnny (Sexton). (Taking them off at half-time) was a decision we had made beforehand.

“It was just a case of Sean needing a bit of game-time, Johnny needing to be reintegrated and I thought they both acquitted themselves really well.”

The Italians threatened at various intervals through wingers Leonardo Sarto and Sinoti Sinoti, and got a deserved try in the 48th minute from scrum half Tito Tebaldi.

Zebre were first to threaten in this round 10 tie, their Australian out-half Daniel Halangahu finding Sinoti in space and Leinster had to react swiftly to close him down.

Halangahu was off target with a subsequent penalty and a scrappy spell ensued before Leinster began to prosper in the second quarter.

Conway was held up short in the 15th minute after a smart sidestepping break from Sexton, and nothing came of a couple of five-metre scrums.

Sexton probed with the boot five minutes later, hanging up a cross-field kick for Isa Nacewa who was well challenged by the covering Sinoti.

Leinster took the lead 25 minutes in as Sexton split the posts after Zebre were pinged for not releasing. A half-break from Gordon D’Arcy was the highlight of the build-up.

McFadden embarked on a thrilling run straight from the restart, collecting Halangahu’s kick, breaking onto his own chip at pace and Zebre’s defence was unable to hold out.

Sexton drove play to the right where he linked with Sean O’Brien who passed for winger Conway to dot down in the corner. Sexton converted with aplomb for a 10-0 advantage.

A succession of penalties led to Italy lock Quintin Geldenhuys being sin-binned in the 32nd minute and Leinster added a timely second try, Sexton’s neat footwork seeing him slice through from close range.

Television match official Alan Rogan confirmed the grounding and the try scorer added the extras, handing Leinster a 17-0 buffer to take into the break.

Sexton and O’Brien were withdrawn at half-time with two crunch European clashes with Clermont Auvergne looming, and Zebre were the aggressors briefly when play resumed.

A bout of strong carrying – inspired by the returning Geldenhuys and prop Matias Aguero – led to Tebaldi breaking off a ruck to score his converted try.

The margin was down to 10 points, but Leinster quickly extinguished any hopes Christian Gajan’s men had of a shock Dublin win. Winger McFadden, taking over the kicking duties from Sexton, settled the hosts down again with a well-struck penalty.

D’Arcy then drew in a couple of defenders to pass for McFadden to barrel his way through for a fine first try, with the Ireland international nailing the conversion too from the left.

The province’s bonus point score arrive with 11 minutes remaining, as lively replacement Healy bounced off Andrea de Marchi’s challenge to raid in at the left corner.

With a flood of replacements for both sides, Leinster ended the game with Conway at full-back, Isaac Boss on the wing and McFadden in the centre.

Rhys Ruddock, Boss and Healy were to the fore as Leinster pressed for a fifth and final try and it duly arrived, Ian Madigan punting the ball across to McFadden who barged through two loose tackles to complete his 15-point tally.