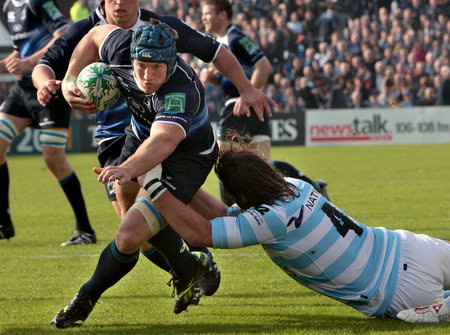 Speaking after the game, Heineken Man of the Match Sean O’Brien said: “There are a lot of tired bodies in the dressing-room because we wanted to give a good performance and it was pleasing that we managed to do that.

“Racing are a quality side right across their team and we knew that they would be physical. We tidied up on some of our basics coming into the game, which was important, and our aim today was to win, which we’re delighted to do. There are going to be no easy games in this group, that’s for certain.”

Captain Jamie Heaslip added: “I’m very proud of the way the lads went about their performance out there. We showed a lot of ticker and it was pleasing that our defence held tight against some extraordinary pressure by them. So we’re pleased to get the win and the bonus point and we’ll move on next week for another massive challenge against Saracens.”

Before the start of the game, the RDS crowd impeccably observed a minute's silence for one of Irish rugby's favourite sons – Moss Keane – who died after a long illness on Tuesday.

Leinster started strongly and were rewarded with tries from man-of-the-match Sean O'Brien (30 mins) and Rob Kearney (33) putting them 21-6 ahead at half-time.

Leinster added a third try from Richardt Strauss in the 48th minute who capped a fine all-round performance with his first try in the competition, before Albert Vulivuli hit back for the Top 14 leaders.

There were also strong performances up front from Devin Toner, Nathan Hines and skipper Jamie Heaslip who mounted several crunching hits as the intensity increased in the second half. Gordon D'Arcy and the lively Kearney caused problems for the French visitors who bravely fought back against the deficit.

A 10-point burst got Pierre Berbizier's side back in the hunt with Francois Steyn slotting home a penalty over from inside his half and Vulivuli's effort adding to Jerome Fillol and Steyn's kicking haul.

But as the game closed, substitute Fergus McFadden delighted the vociferous RDS support by tearing up the right wing for an 80th minute try, putting the seal on a deserved victory for the Blues as they prepare for a trip to the English capital next weekend.