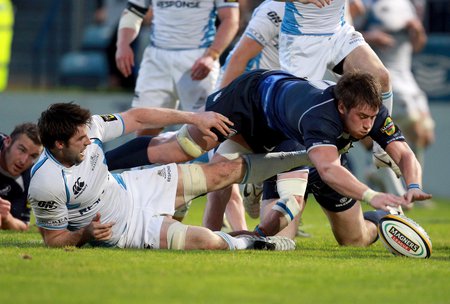 Speaking after the game, Volkswagen Man of the Match Fergus McFadden said: “We got a good going over at half time, but we knew that it was going to be tough at time against Glasgow because it always is against them.

“Thankfully we got it right but there are definitely areas of improvement for us because things weren’t clicking for us. We knew that if we kept our discipline that we could pull through and the lads showed great enthusiasm all week.

“We have a massive semi final against Ulster and the talk in the dressing room in the aftermath was all about that game.”

Duncan Weir kicked the visitors into a 6th minute 3-0 lead with a penalty before Fergus McFadden kicked penalties on 26 and 36 minutes to edge Leinster into a 6-3 half time lead.

Chances were few and far between for the hosts in the opening half but a wonderful Isa Nacewa did find Shane Horgan who was adjudged to have put his foot in touch in a tight call by the TMO which took a considerable amount of deliberation in the 34th minute.

Leinster ran four tries past Glasgow Warriors in the closing 25 minutes with Horgan gathering first a wonderful crossfield kick from out-half Ian Madigan to touch down, with the call again going to the TMO when the Boyne man juggled and gathered the ball inches over the line.

Though McFadden's difficult conversion attempt in the 54th minute fell wide of the posts he would make amends two minutes later when he slotted home Gordon D'Arcy's try when he was superbly assisted by skipper Jamie Heaslip following a lineout inside the Glasgow 22.

David Kearney entered the fray and replaced Nacewa and immediately the Academy graduate set about his task with relish making two wonderful incisive breaks as Leinster chased a bonus point.

However it was the impressive Dominic Ryan who grabbed Leinster's third try when he pounced after a 7st minute Kearney burst, with McFadden again adding the points into the North Stand end.

Finally the bonus point honours were secured when Kevin McLaughlin barged over for his first try of the season after some fine assist work from McFadden, which he also converted to bring his tally to 18 points, as Leinster earned a home semi final berth.