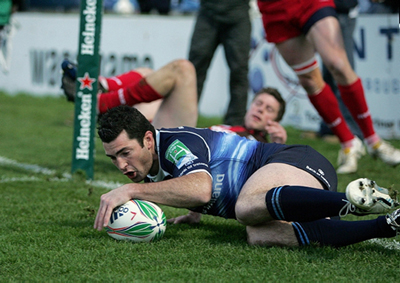 Speaking after the game, Heineken Man of the Match Jamie Heaslip said: "To come away with 10 points out of these two games is great and we’re happy with our performance. But in saying that we have plenty more to work on. We got some good quick ball which opened up space for our backs who were very clinical.

"But we won’t get carried away because the Scarlets are a very good team. to be honest we’re a bit annoyed that we let in a try, but all in all we’re pleased and we’re looking forward to the Ulster game on St. Stephen’s Day which will be another tough battle."

Kearney then doubled Leinster’s lead in the 22nd minute when his effort went to the video replay after some excellent hands from CJ van der Linde and Shane Horgan.

Horgan, continuing his excellent recent run of form, punced for his side’s third try in the 38th minute when he intercepted Deacon Manu’s pass in the Leinster 22 and sprinted clear to score past the despairing defence to leave the score 15-0 at the interval.

Leinster picked up where they left off in the 46th and Gordon D’Arcy’s effort through the Scarlets rearguard ensured a bonus point for the hosts, with Shaun Berne converting, to push the score to 22-0.

Though Rhys Priestland added a 66th minute try for the visitors, it was scant consolation as Leinster enjoyed dominance up front and Eoin Reddan was an effective conduit for some flowing back play.

Brian O’Driscoll, a constant menace for the Llanelli defence, scored the first of his two tries in the 56th minute – with D’Arcy adding his second on 59 minutes, which Berne converted – and then closed off his side’s seventh effort in the 72nd minute.