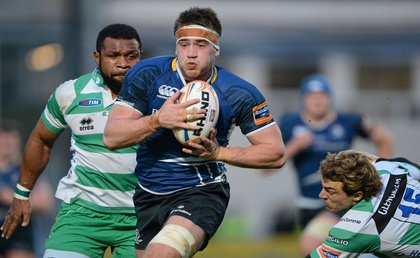 Joe Schmidt’s charges started the game with the clear intention of attacking Benetton Treviso from the word go and following some excellent early pressure in the Italians’ half, they were rewarded with a 10th minute try.

The industrious Dominic Ryan reached over in the corner at the end of a long spell of play on the right wing. Ian Madigan was off target with a difficult conversion attempt.

The home supporters only had to wait three more minutes for their side’s next try, as hooker Sean Cronin ran through on the left side following a couple of outstanding breaks by his Ireland colleagues Luke Fitzgerald and Fergus McFadden.

Madigan had no problem adding the extras on this occasion. After Treviso out-half James Ambrosini missed a decent opportunity from a close range penalty in the 17th minute, Leinster increased the cushion to 19 points of Ryan’s second try – the product of a well-orchestrated lineout drive.

Cronin joined him in bagging a brace when he finished off a sweeping move in front of the posts just four minutes later, securing the bonus point in the process.

Centre Andrew Goodman, who had an excellent 54-minute shift, stormed into the 22 and Cronin took a superb angle to gather the pass and scorch through.

Madigan was on hand to convert both of these scores. Treviso pressed towards the end of the first half but Leinster held onto a seemingly insurmountable 26-0 lead at the interval.

When the sides met in Treviso in September, Leinster emerged as 19-18 victors after a titanic struggle. They needed a late drop goal from the currently injured Jonathan Sexton to seal the victory.

This rematch was a completely different affair with Leinster maintaining their momentum into the second period. The 22-year-old Ryan showed initiative to break away from a maul before touching down to complete his hat-trick.

Madigan’s radar was very much in check for this tie, and he superbly converted from the left touchline to bring his personal tally up to eight points.

Credit must go to Treviso, however, as they displayed a willingness to achieve some sort of a consolation from their trip to Dublin.

Franco Smith’s men got the score that their efforts deserved when winger Ludovico Nitoglia showed plenty of sharpness to ground the ball on the right at the end of a fine team move.

Schmidt introduced a number of familiar faces from the replacements bench, including regular captain Leo Cullen. Into the final quarter, it had very much become a damage limitation exercise for Treviso.

They continued to enjoy some promising spells of possession in the Leinster half, but a fifth and final try soon followed for the province.

Leo Auva’a, a late call-up to the replacements bench after Shane Jennings (shoulder) failed a fitness test, got over to the right of the posts.

With Madigan now off the pitch it was left to McFadden to comfortably convert, wrapping up a pleasing night for the hosts who were captained by young flanker Rhys Ruddock on the occasion of his 50th cap.