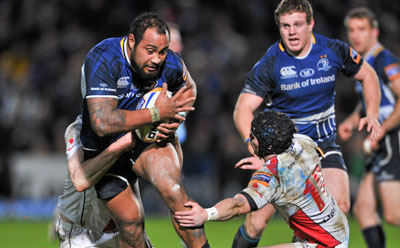 Despite failing to hit the heights of their recent performances, Leinster still did enough to carve out a convincing six-try win over provincial rivals Ulster in their St. Stephen’s Day derby clash at the RDS… Joe Schmidt post-match reaction…

Ulster showed huge commitment in defence when facing into a stiff first half wind, but tries from Fionn Carr, Sean Cronin and Leo Auva’a had Leinster 21-6 ahead at the break.

The hosts, who are now six points clear at the top of the PRO12 table, were nowhere near their best during this festive encounter and Ulster hit back with a well-taken try from debutant Chris Cochrane.

However, Leinster’s forwards dominated the final quarter and a penalty try and further touchdowns from Ian Madigan and replacement Jamie Hagan completed the home victory.

Speaking after the game, Leinster head coach Joe Schmidt said: “We felt they would be pretty tough because they’d have a lot of enthusiasm.

“It’s pretty hard to drive the mental preparation of your team for games like that because you have everything to lose and not a lot to gain.

“In the end we ticked the key box of getting the five points, so I’m delighted with that. It does give us a bit of a buffer in the table with two tough away games coming up (against Connacht and Cardiff).”

Meeting Leinster for the first time since last season’s semi-final, Ulster boss Brian McLaughlin opted to test the depth of his squad by fielding five debutants from the kick-off.

Most of their starting line-up had featured during the Ulster Ravens’ run through to the British & Irish Cup quarter-finals, while the men in blue boasted a far more settled side.

With ten Ireland internationals on board, Leinster were keen to use that experience to telling effect but Ulster enjoyed a positive opening spell.

Once the handling errors were cleared up, Leinster threatened at close quarters and out wide. Cian Healy was held up over the line after strong drives from Cronin and Devin Toner.

From the resulting five-metre scrum, Auva’a charged off the base but a combination of Ali Birch, McKinney and Nelson prevented him grounding the ball.

The try did come just moments later, Carr scooping up Madigan’s quick pass out to the right and going over in the corner. Fergus McFadden followed up with an excellent conversion.

McFadden and Luke Fitzgerald soon sparked a fleet-footed raid through midfield and with the Ulster defence sucked in, Madigan’s accurate pass gave Cronin an easy run-in on the left.

That converted try was swiftly replied to by McKinney’s first successful penalty, with Carr lacking support after he had been tackled to the ground.

Ulster enjoyed a decent spell coming up to the interval, with the lively Paul Marshall keeping his forwards on course. They ground out the hard yards for McKinney to slot a second three-pointer.

However, Leinster struck a psychological blow on the stroke of half-time. Having turned down a kickable penalty, a solid scrum allowed man-of-the-match Auva’a power past Robbie Diack and away for try number three.

McFadden’s conversion pushed the lead out to 21-6, yet Ulster’s response early in the second half yielded a deserved try – the blonde-topped Cochrane sweeping through for the 48th minute score.

McKinney’s pass back inside invited the winger past two initial tackles and he showed admirable strength to reach the line despite the best efforts of Eoin Reddan and Fitzgerald.

McKinney added the extras and as confidence began to spread throughout the Ulster ranks, Michael Allen was only a pass away from putting full-back Nelson through for their second try.

Leinster rallied on the hour mark – the home side benefiting from a more direct approach – but McFadden’s subsequent penalty attempt bounced away off a post.

Nevertheless, Leinster’s superiority in the set piece was all too obvious when Ulster collapsed a series of scrums near their line and referee Peter Fitzgibbon duly awarded a penalty try.

McFadden converted the bonus point score and split the posts again after Madigan coasted in behind the posts and prop Hagan burrowed over from close range.