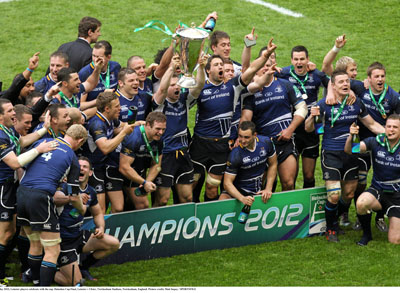 Taking the title for a third time in four years, Leinster underlined their pedigree with a record winning margin in a final and they also became the first team to go through a nine-match Heineken Cup campaign unbeaten.

Thriving on the open nature of this all-Irish affair, Joe Schmidt’s men landed two considerable blows when man-of-the-match Sean O’Brien and Cian Healy cut through for first half tries.

Jonathan Sexton added the extras to both efforts, with Ruan Pienaar’s second penalty closing the gap to 14-6 by half-time.

A penalty try kept Leinster on course, however Ulster dug deep with Pienaar kicking a third penalty and Dan Tuohy breaking through for a much-needed try.

But Leinster got back on top in the closing stages and put a gloss on the final scoreline thanks to a late double from replacements Heinke van der Merwe and Sean Cronin.

Ulster can be hugely proud of their efforts throughout the tournament and they were very worthy finalists, attempting to add to that breakthrough triumph of 1999 in Brian McLaughlin’s last match as head coach.

They just met a Leinster team in all-conquering form and Schmidt’s side, who were denied a famous double last year, will be hungry to achieve that very feat in next week’s RaboDirect PRO12 final.

The runaway win saw Leinster become only the second side after Leicester Tigers (2001-2002) to retain their European crown, while the trophy presentation marked a special moment for captain Leo Cullen as he is the first player to lift the Heineken Cup on three occasions.

The 42 points scored by Leinster beat the previous record for a final of 34, which Leicester ran up in 2001. Their five-try haul also eclipsed Brive’s four from the 1997 decider, and the winning margin of 28 points was another milestone for the province.

The early tension at Twickenham was broken by a smart break from Darren Cave and Ulster’s strong start was rewarded by an eighth minute penalty from South African Pienaar.

A couple of turnovers and a powerful thrust from Gordon D’Arcy saw Leinster bounce back impressively, and O’Brien’s power took him over past two tacklers in the 13th minute.

The flanker lunged over past Pedrie Wannenburg and Tom Court for a try which television match official Jim Yuille confirmed. The left-sided conversion was expertly added by Sexton.

Armed with a 7-3 lead, Leinster now had the lion’s share of possession and Rob Kearney tested the Ulster defence at close quarters while also displaying his aerial prowess.

Sexton slid a 45-metre penalty to the left and wide and both sides pressed amid a spell of clever offloads and incisive passing between backs and forwards.

A loose ball broke for Richardt Strauss to begin a thrilling breakaway which saw Eoin Reddan go close on the right and it took a thundering hit from Stephen Ferris to thwart Isa Nacewa on the left.

Huge pressure from the respective defences produced a listless period until Leinster pounced again on the half hour mark, setting up Healy’s well-taken score.

Firstly, a superbly timed offload from Brian O’Driscoll sent O’Brien barrelling towards the Ulster try-line. The Ulstermen scrambled back to keep him out, but Reddan delivered a snappy ruck pass for Healy to crash over to the left of the posts.

Sexton converted to put 11 points between the sides. Ulster gained good ground coming up to the break, although Paddy Jackson missing a close range drop goal.

Still, they did receive a timely boost right on the stroke of half-time when Pienaar fired over a terrific penalty from inside his own half.

But Leinster made further headway five minutes into the second half. Ulster lost ground with a mix-up between Ferris and Jackson and from the resulting lineout, a powerful maul drive forced Ulster to infringe and referee Nigel Owens awarded a penalty try.

Sexton’s conversion stretched the lead out to 21-6 before Pienaar snapped three points back for the underdogs from a 32-metre penalty.

But straight from the restart, Ulster were guilty of going off their feet at a ruck and Sexton smacked over his first successful penalty from wide out on the right.

With the tireless John Afoa and Darren Cave standing out, Ulster hammered away at the Leinster defence with the title holders having to make tackle after tackle.

The men in blue eventually gave way with 61 minutes on the clock, Paddy Wallace’s neat half-break and improvised pass putting lock Tuohy over in the left corner.

Pienaar’s conversion attempt went narrowly wide and as the 81,774 crowd – a record for the final – took an intake of breath, Leinster confidently set about sewing up the result.

Strauss carried strongly as the blue tide burst through again, teeing up a Sexton penalty that steadied the ship at 27-14.

Sexton added another with six minutes remaining, punishing the yellow-carded Stefan Terblanche for a tip tackle on Cronin.

Cronin and Heineken Cup debutant John Cooney then combined to set up van der Merwe for Leinster’s fourth try and a fifth followed right at the death.

Ian Madigan’s sweeping pass gave O’Brien the time and space to send Cronin charging in from the left and Fergus McFadden converted with the last kick of the game.