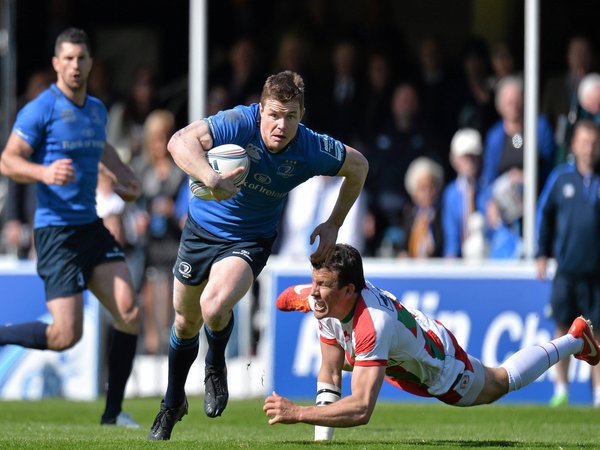 Joe Schmidt’s men ran out comfortable five-try winners at a sold-out RDS, where the province will host Stade Francais in the Challenge Cup decider on Friday, May 17.

Two tries from man-of-the-match Jamie Heaslip book-ended a evenly balanced first half, with Leinster’s precise passing and finishing being the difference at the break.

Dimitri Yachvili’s third penalty in the 37th minute left Biarritz just 10-9 behind, only for Leinster to dazzle in the Dublin sunshine with two late tries.

Jonathan Sexton and Heaslip went over in a blockbusting three-minute burst, the former adding the conversions for a sudden 24-9 interval advantage.

The sin-binning of Takudzwa Ngwenya, early in the second period, signalled the death knell for Biarritz who will miss out on Heineken Cup rugby next year.

Speaking after the game, Leinster head coach Joe Schmidt said: “It was definitely up there (in terms of our performances this year). I do think Biarritz dropped off a bit. If we were allowed to play we really enjoyed playing, I think that was demonstrated on the field today.

“I do think we missed a few things in middle of first half. We missed a couple of lineouts and a five-metre scrum which we got free-kicked.

“They were frustrating platforms to lose at that stage, 10-3 up, we should really have been trying to get that space on the scoreboard that you need against a good side.

“It was not perfect, but there were some little bits of perfection that you would really like to see.”

He added: “The first try from Jamie, I thought, was top drawer. You work a long time on those ones to try and get them dead right.

“The second try was really good as well. It was a nice short pass from Rob Kearney to Brian O’Driscoll, who was strong in the tackle. I just felt today was a big game and the big game players really did stand up.”

The hosts had to absorb a bright early spell from Biarritz, but a well-worked lineout move caught the Basque side out for Heaslip’s opening try, five minutes in.

Richardt Strauss threw deep to Devin Toner who palmed the ball down for the onrushing Nacewa to charge over the 10-metre line and Heaslip’s timely support run saw him cross to the left of the posts.

Sexton converted but as Leinster pressed during a high-tempo spell, the fit-again out-half badly hooked a penalty that went wide to the left.

Sexton was back in the thick of the action on the quarter hour, setting up a brisk O’Driscoll break and getting the return pass – only for Ngwenya and Jean-Pascal Barraque to hold him up past the try-line.

Ngwenya soon burst into life in attack, charging downfield to set up an 18th minute penalty that Yachvili comfortably converted for 7-3.

Biarritz, with the breeze behind them, make further inroads, capitalising on a stuttering Leinster lineout as Imanol Harinordoquy, Thibault Dubarry and Pelu Taele made the hard yards.

Good feet from Heaslip, carrying more in the injury-enforced absence of Sean O’Brien, saw him break Biarritz’s hold on possession and territory as he powered over halfway.

Leinster won a subsequent penalty but Sexton’s instinctive punt to the left corner for Nacewa was knocked on under pressure by the winger.

A sweetly struck penalty from Yachvili, whipping the ball over from distance, made it a one-point game until Leinster found an extra gear in the closing minutes of the half.

O’Driscoll and Rob Kearney combined smartly to unlock the visitors’ defence and put Sexton stepping over for the province’s second try.

The third followed in injury-time as Heaslip reacted quickest to a loose ball at the side a ruck and his angled run from the 22 doubled his try tally.

Biarritz watched Yachvili miss a long range penalty on the resumption, and the title holders’ hopes were soon extinguished by Ngwenya’s sin-binning and Leinster’s ruthlessness on the ball.

Ngwenya chased back hard to deny Ian Madigan a certain try after an interception, however the American international failed to roll away and earned a yellow card.

Leinster took immediate advantage of the extra man, showing their potency again and again from turnover ball. Sexton popped over a penalty and then a delightful interchange between Sexton and Nacewa outfoxed three covering defenders and produced a deserved try for the latter.

Sexton’s withdrawal allowed Madigan to slot back in at out-half, and the recent Ireland debutant kept the scoreboard running in Leinster’s favour with a well-hit conversion and penalty.

Rob Howley headed up the watching Lions party and he would have been pleased to see O’Driscoll nab a try, finishing off some good work from Nacewa and fast-breaking replacement hooker Sean Cronin.

Biarritz battled on and with 13 minutes left hooker Heguy broke free from a ruck on the Leinster 22 to register their lone try. 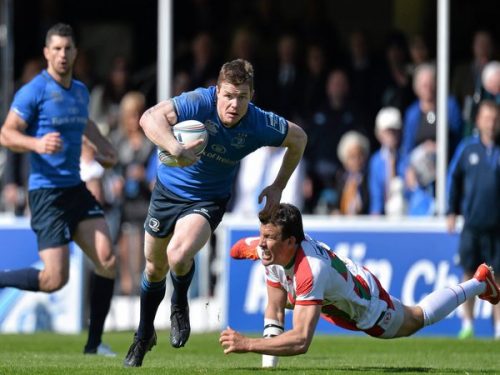