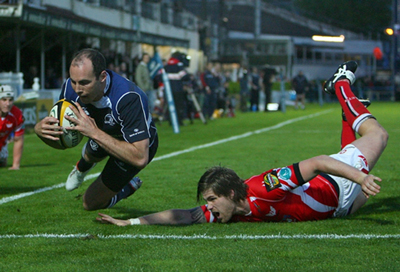 Speaking after the game, Leinster out-half Jonathan Sexton said: "We’re delighted with the performance. We spoke during the week about backing up what we did last weekend, and there’s no doubting that the Munster match was a huge occasion.

"We got back to things very quickly and managed to hit the ground running despite the short five day turnaround, so we’re pleased."

Full back Isa Nacewa played a prominent role in Leinster’s opening two tries when he first unselfishly put Luke Fitzgerald through for the first of his two tries on 16 minutes, and then five minutes later made a superb break to find the excellent Shane Horgan who touched down.

Jonathan Sexton added both conversions and added a third when the lively Fitzgerald rounded the Scarlets defence on the stroke of half-time.

Mark Jones had given the visitors a hint of a chance on the half hour mark, but it was one-way traffic after the interval with further scores coming from Brian O’Driscoll (46), Sexton who wonderfully broke away (54), Horgan (62) and substitute Girvan Dempsey (68).