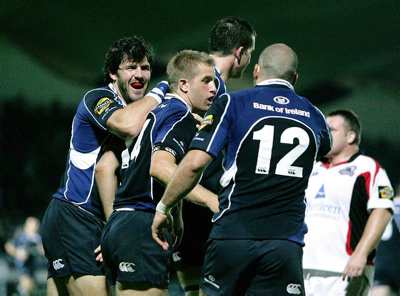 Leinster scored six tries, with Luke Fitzgerald chipping in with a hat-trick, as they defeated Edinburgh 52-6 in the RDS on Friday evening…

Speaking after the game, Luke Fitzgerald said: "We’re delighted with the game, particularly when you consider the calibre of opposition that we were up against. It’s nice to get three tries, but the most important thing was the win, which we’re delighted about getting."

Isa Nacewa added: "The RDS is an outstanding ground to play rugby. It’s a pleasure to play in front of such an enthusiastic crowd, so it was a really nice night. Everyone stepped their game up tonight which was important because Edinburgh are a quality side."

A hat-trick of tries by Ireland back Fitzgerald and further touchdowns by John Fogarty, Shane Jennings and Chris Keane helped the Irish province to a convincing win.

Edinburgh’s only points came from first-half penalties by Phil Godman and Chris Paterson as Leinster recorded their first win of the campaign.