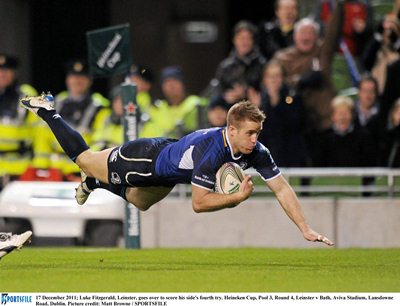 Three first half tries – two of them scored while Leo Cullen was in the sin-bin – saw Leinster regain their ruthless streak amid a festive atmosphere at the home of Irish rugby.

A crowd of 46,365, the second largest ever for a Heineken Cup pool match, watched on as Rob Kearney, Luke Fitzgerald and Jonathan Sexton all crossed the visitors’ whitewash to give Joe Schmidt’s charges a 24-6 half-time lead.

Fitzgerald darted over just 30 seconds into the second half to chalk up the bonus point, and there were further tries for Eoin Reddan and replacements Rhys Ruddock and Ian Madigan.

The hosts thrived in broken play, efficiently putting away the sort of chances they failed to convert at the Recreation Ground just six days ago.

Despite conceding the half century of points, Bath salvaged some pride in the latter stages of this return fixture with Stephen Donald, Dave Attwood and Ben Williams helping themselves to tries.

Coupled with the draw between Montpellier and Glasgow Warriors, this fine victory gives Leinster a commanding lead at the top of the pool heading into the final two rounds next month.

Joe Schmidt said afterwards: “We are obviously delighted to get the five points and with the way some of the tries were scored, also some of the running lines and some of the quality in the pass.

“We’ve come a long way from drawing at Montpellier but that was probably only our second or third game together (with the internationals back).

“I would have hoped we would have been a little bit more accurate last week (in Bath). Fortunately it was exhibited in fantastic conditions in front of a fantastic crowd tonight.

“I think that’s certainly something that sparks a real enthusiasm among the players.”

When the action began, a long pass from man-of-the-match Sexton invited Fergus McFadden to charge into open space on the right. The quick counter led to a third minute penalty for the province’s in-form out-half.

Sexton’s effort bounced back off the right hand post however. Devin Toner gobbled up the loose ball, setting a wave of attacks in motion and after a Mike Ross-inspired drive was held up short, Reddan popped the ball back for Kearney to dive over for the first try.

Sexton slotted the conversion but Bath got off the mark in the eighth minute, benefiting from a fortuitous scrum call as Olly Barkley landed a close range penalty.

Leinster hit back with a brilliant drop goal from deep from Sexton which was replied to on the quarter hour by Barkley, following a good spell of possession for the English outfit.

A series of penalties gave Bath the chance to dictate for a short period before Jamie Heaslip won a crucial turnover near his try-line to spark Leinster’s response.

A lineout steal by Toner added further momentum to the blue tide and although the sin-binning for Cullen proved a setback, Fitzgerald soon struck for the second try.

Bath coughed up possession while on the attack and Toner provided the change of direction and also a terrific one-handed offload to send Kearney sprinting over halfway. The final defender was sucked in and Fitzgerald coasted over to the left of the posts.

The extras were added by Sexton for a 17-6 scoreline and despite being down to 14 men, Leinster’s cutting edge in attack was just too much for Ian McGeechan’s side to handle.

The penetration came from far out again, backs and forwards combining before Fitzgerald took advantage of a mismatch on the left to dart away and then pass for the supporting Sexton to ghost over in the corner.

The try scorer tagged on a well-struck conversion from the left before missing an injury-time penalty, leaving Bath with an 18-point deficit at the break.

Confident in possession, Leinster wasted little time in testing out the Bath defence when play resumed. They pressed from deep, moving the ball out to the left where a Kearney offload sent the excellent Fitzgerald slicing past Jack Cuthbert and Sam Vesty to devastating effect.

There was no catching the flying winger as he raced away for his second try of the night and Sexton followed up with another pinpoint conversion.

Worse followed for the visitors when they had Vesty and Chris Biller yellow carded within five minutes of each other. Leinster needed no second invitation and Reddan squeezed over off the back of a ruck for a 51st minute converted try.

Sexton turned Ruddock’s score on the hour mark into a seven-pointer, the young replacement shrugging off Matt Banahan’s challenge on the way to the line.

Schmidt emptied his bench in the final quarter and mistakes did creep into Leinster’s game, the intensity dropped and missed tackles opened the way for New Zealand World Cup winner Donald to breach the home defence from close range.

Attwood raided in under the posts with five minutes remaining, with Barkley converting both tries as the gap was closed to a more respectable 25 points.

Leinster continued to look dangerous when on the ball and Madigan, sent on in Sexton’s place, showed great feet to prize open the Bath defence and round in close to the posts for an Isa Nacewa-converted try.

But the fact that the defending champions leaked a third try and 27 points in all will have disappointed Schmidt and his fellow coaches – some loose defending was punished in injury-time by Williams who pushed the try count into double figures.