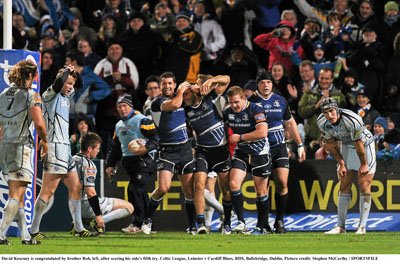 Three Ceri Sweeney penalties had the Blues just 13-9 behind at the break, but Leinster gradually went up through the gears in the second half to add five more tries to Isaac Boss’ earlier effort

David Kearney went over twice in as many minutes, New Zealanders Nathan White and Leo Auva’a both touched down and Ian Madigan also breached the Cardiff defence.

Fergus McFadden had another impressive night with the boot, kicking three conversions, three penalties and a drop goal for an 18-point contribution.

The result, which extends Leinster’s unbeaten run to nine matches, has moved them to the top of the RaboDirect PRO12 table.

Speaking afterwards, Leinster hooker Richardt Strauss said: “It was a very good win. We knew it was going to be a tough challenge, we knew all about their ball carriers’ ability.

“We said at half-time that we’re letting them into the game with ill-discipline and we managed to rectify that in the second half, keeping hold of the ball and scoring tries.

“We knew it was a game we were going to have to fight for for 80 minutes and luckily we did in the end.

“There were a number of changes, but that’s the good thing about our squad. We’ve got competition right throughout it and hopefully we can give the coaches something to think about every week.

“Being top of the table is obviously where we want to be. I think we did pretty well when the lads were at the World Cup, so hopefully we can carry on that good form.”

Sweeney and McFadden swapped penalties inside the opening five minutes, with the Blues, despite being hampered by international call-ups and injuries, gaining an early foothold.

But Leinster soon stamped their mark on the game. Sean O’Brien rampaged forward, bringing play into the Cardiff 22 and after Isa Nacewa was held up short, Boss burrowed over from a metre out.

The scrum half’s try was comfortably converted by McFadden who nailed a second penalty effort in the 14th minute, coping well with the windy conditions.

Leinster showed an eagerness to run the ball from deep and Nacewa made a slashing break which put the Blues under pressure. However, the Welsh region retrieved the situation and Sweeney clawed back three points midway through the half.

Cardiff’s scramble defence served them well again when a looping pass from Madigan put the busy Fionn Carr into space. He kicked ahead but full-back Dan Fish, who started in place of the injured Chris Czekaj, was there to cover the danger.

Casey Laulala led a counter attack for the Blues around the half hour mark, but Sweeney was off target from a subsequent penalty.

The Blues out-half was successful with a kick on the stroke of half-time, after Cian Healy had gone offside and got involved in a skirmish with Cardiff captain Paul Tito.

McFadden settled Leinster into the second half with an early penalty and the home attacks were soon coming in waves.

Carr took off over halfway, linked with Madigan and prop White was up in support to cover the final 22 metres and ship a despairing tackle from Fish before twisting over for a brilliant team try.

McFadden converted and added a drop goal to leave the Welsh region 26-9 adrift. Cardiff hit back and Leinster had to make do without their captain Leo Cullen, who was sin-binned for a ruck infringement close to his try-line.

The Blues could not squeeze a score out of a series of five-metre scrums and after losing a large chunk of territory, their scrum half Richie Rees was yellow carded for killing Leinster ball in his 22.

Just a minute later, an inviting pop pass from replacement Eoin Reddan sent Madigan dashing past two defenders for the province’s third try of the night.

McFadden converted and Jonathan Sexton, sprung from the bench, dangled a neat kick into the right corner for Kearney to notch his first try.

He was in under the posts barely two minutes later. Another excellent attack from deep saw Sean Cronin show good pace before Sexton and Nacewa carried forward and the young winger scampered through from the back of the ruck.

Sexton added the extras to that try and also Auva’a’s last-minute effort, which saw the powerful back rower take a quick tap and barge over from close range.