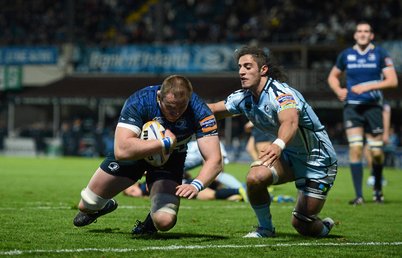 The Blues were all at sea as Leinster ruthlessly took them apart in the first half, racking up the quickest bonus point of this season’s RaboDirect PRO12 after just 26 minutes.

Richardt Strauss, Ian Madigan, Jamie Heaslip and David Kearney all touched down to seal the province’s five-point return, and Heaslip and Cian Healy added two more tries before the break.

40-3 adrift at half-time, Cardiff gradually found some rhythm in the second half with Alex Cuthbert, Leigh Halfpenny and Tom James finishing off tries.

But the hosts managed to add three more to their tally. The excellent Jordi Murphy and replacements Damian Browne and Fionn Carr all crossed the whitewash with the latter adding the ninth try in the final minute.

The only negative on the night from a Leinster and Ireland point of view was the ankle injury which forced Brian O’Driscoll off midway through the first half.

Speaking after the game, Leinster head coach Joe Schmidt said: “I think it shows the evidence of an extra day’s recovery. We had a seven-day turnaround whereas Cardiff had a six-day one after a tough game with Toulon.

“So I certainly wouldn’t read as much into it that the nine tries may suggest, but I do think that the first half was really good value from us.

“We play Ospreys next Sunday and that will be a tough match, but like us they will also be missing their internationals. We’ve managed to string a few wins together so we would like to keep that going.”

He added: “Brian sprained his ankle. He was going to play on. In the end, we measured up the responsibilities that he has got coming up (with Ireland) and we replaced him. We don’t think at this stage that it is too serious.”

The returning David Kearney made an impact within three minutes, exposing some sloppy defending from the Blues as he blazed through midfield.

Gordon D’Arcy kept the move going and good footwork allowed Strauss to burrow over on the right, scoring a try to celebrate his first call-up to the Ireland squad earlier this week.

Jonathan Sexton converted and Leinster were in no mood to sit on their early lead with O’Driscoll evading his Lions team-mate Jamie Roberts in the build-up to their second try.

Fergus McFadden cut in smartly off his wing and passed for supporting full-back Madigan to finish off to the left of the posts. Sexton converted for 14-0.

Cardiff clawed back three points through the boot of Halfpenny and Tom James threatened soon after as the action quickly swung from end to end.

Leinster continued to look explosive in attack against a sluggish Cardiff defence. O’Driscoll was involved twice, getting the better of Roberts and Josh Navidi, before passing for Kevin McLaughlin to put Heaslip over on the left.

O’Driscoll damaged his left ankle during the move and received treatment while Sexton converted. Brendan Macken was sent on to replace the Ireland captain, who was thankfully able to walk off the pitch unaided.

Leinster were unrelenting as Murphy and D’Arcy bulldozed through the attempted tackles and Sexton swung a long pass out for Kearney to slip in along the right touchline for the bonus point score.

Sexton maintained his 100% kicking record by adding the extras and with Cardiff losing prop Scott Andrews to the sin-bin, the visitors were soon standing behind their posts again.

From a close-in scrum, Leinster piled on the pressure and number 8 Heaslip plunged over off the base for his second try. Sexton’s successful kick extended the margin to 32 points.

Prop Healy, making yards with every carry, then stretched past two defenders to claim Leinster’s sixth try with Sexton suffering his first miss.

The nightmare continued for Cardiff just 90 seconds into the second period as man-of-the-match Murphy, supported by replacement Browne, drove over for his try.

Sexton landed a superb conversion from the left before the Blues belatedly mounted a response, Cuthbert cutting through out wide for an unconverted effort.

Leinster rumbled forward ominously from the restart and a deft pass from Madigan released Browne for a simple run-in despite Navidi’s last-ditch challenge.

Sexton supplied the extras for a 54-8 lead but Cardiff roused themselves for a late bonus point push. Firstly, Jason Tovey looped a pass out for Halfpenny to touch down and convert.

Halfpenny added another seven-pointer with 11 minutes remaining, after Tom Williams’ kick forward bounced favourably for James to score again on the left.

Normal service was resumed late on though as Leinster, with the fit-again Rhys Ruddock standing out, wrestled back control of proceedings.

Sexton dangled a kick over to the left where replacement Carr gathered, shipped a tackle from Halfpenny and stretched over from a metre out.