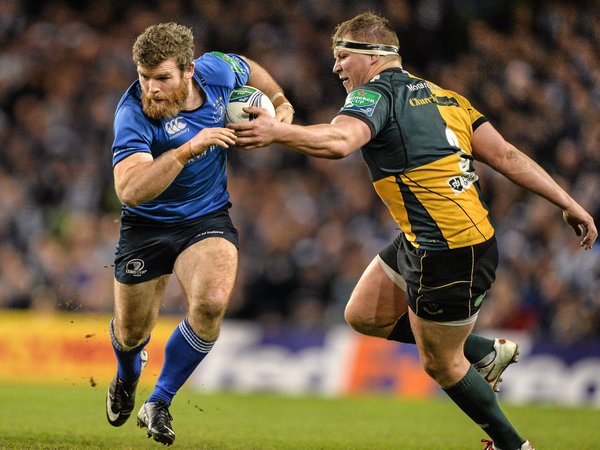 Tries from George North and Jamie Elliott bookended this round 4 clash, as Jim Mallinder's men recovered from last week's 40-point hammering from Leinster.

Matt O'Connor's charges had the opportunity to move ten points clear at the top of Pool 1, as they lined out in front of a 47,370-strong crowd.

But Northampton – bottling the hurt caused by their collapse at Franklin’s Gardens – landed an early blow with North’s sixth-minute try and led 7-3 at the break.

North, Samu Manoa and Tom Wood helped the visitors boss the physical stakes in the opening half, turning the tables on the province who were error-strewn at times.

An Ian Madigan penalty in the 11th minute put four points between the sides, with the visitors’ scrum half Lee Dickson held up over the try-line and his half-back partner Stephen Myler missing a late shot at the posts.

Leinster resumed on the front foot with Madigan reducing the arrears to a single point. Myler and Madigan exchanged penalties in the final quarter before Northampton held their nerve superbly at the finish, as Kahn Fotuali’i dropped a goal and winger Elliott ran in an intercept score in injury-time.

The result, which brought back memories of Northampton’s round 4 win at Ravenhill last December, keeps Saints in the pool reckoning and leaves Leinster licking their wounds ahead of their trip to Castres Olympique in the next round.

"They were playing for pride for a large part of it. We understood that. We knew they would come back at us and I think the defence at the end (from them) summarised the massive effort throughout the game.

"They kicked it into the corners and drove and made it hard for us to get any field position in the game and off the back of our ill-discipline and penalty count they had opportunities to do that.

"That was our fault. We didn't control possession and didn't get field position and we probably didn't put them under enough pressure. We talked a lot about that during the week but there wasn't a complacent edge to us. We were just inaccurate off the back off their commitment."

He added: "We've got two really tough games (next month), one against Castres away and then we got Ospreys at home. You've got to win those two games.

"They were games that we would have looked at at the start of the group and would have said we wanted and had to win those. It hasn't changed dramatically. We just have to make sure we are at the very top end of our game whenever we play."

Both sides were forced into late switches with a dead leg ruling out former European Player of the Year Sean O’Brien. Shane Jennings joined the Leinster back row, while Dom Waldouck’s absence in the Northampton back-line saw North pair up with Luther Burrell in the centre for the first time.

Northampton had the first glimpse of the whitewash, springing teenage winger Tom Collins free from a solid scrum and Rob Kearney concede a penalty as the pair chased a kick.

Saints went for the lineout option and after second row Courtney Lawes was held up, Dickson and Burrell combined to release North for a close range try converted by Myler.

Luke Fitzgerald wriggled into space to set up field position for Leinster, with Madigan getting them off the mark in the 11th minute. But dropped balls and misjudged kicks made for a sloppy start from the hosts.

Leinster were forced on the defensive again as Wood wielded influence at the breakdown, before Brian O’Driscoll was invited forward by a short Jack McGrath pass.

Saints continued to force the issue though, with North intercepting a Fitzgerald pass and a dogged drive from the forwards almost led to a pushover try for busy scrum half Dickson – Mike Ross did well to hold up him.

Rob Kearney, who was particularly busy in defence, tried to lift the men in blue with two terrific touch-finding kicks – but the Northampton lineout was well-oiled with Christian Day in stellar form.

Myler misjudged a last-minute kick from the left hand side, failing to reward an advancing scrum, and Saints had to weather a Leinster storm in the opening minutes of the second half.

McGrath and Fitzgerald had Leinster within a metre of the try-line, Northampton’s defence holding firm until Madigan's penalty put the minimum between the sides.

Saints went in search of a second try, winning consecutive penalties inside the 22 as they continued to back their lineout. An important tackle by Jennings on Manoa forced a relieving knock on.

A weaving run from the electric Fitzgerald soon brought Leinster downfield and as play continued to break up, North’s deft hands released Ken Pisi for a raid into the 22 and Elliott was just unable to collect the final pass.

Three points from the boot of Myler was a decent reward for Saints’ unrelenting endeavour. Leinster then bludgeoned their way into scoring range with captain Jamie Heaslip and Gordon D’Arcy carrying well.

The province’s hard graft earned a central penalty which Madigan dispatched through the posts with eight nerve-jangling minutes left.

Leinster piled forward in the dying minutes, their forwards scrambling to make the try-line. Northampton’s defence almost gave way amid intense pressure, but a Heaslip fumble in the 22 allowed Elliott to gather and race away for the clinching score. 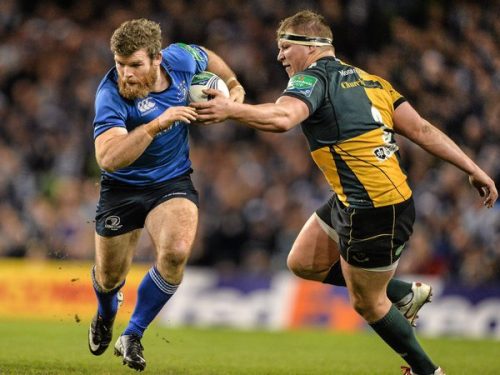