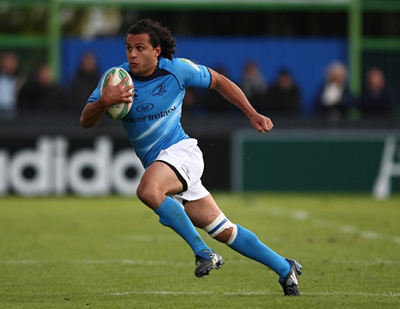 Speaking after the game Heineken Man of the Match Gordon D’Arcy said: “We’ll take the draw, but we’re disappointed because we came over here with our sights on the win.

“Credit to London Irish who came back strongly in the second half. We stood off them and they came at us and we’ll take a look at that ourselves and try to rectify it.

“We were probably architects of our own downfall. We’re delighted to secure a home quarter final for our supporters who would follow us to hell and back.

“If you look around the stadium there was a fair whack of blue there again and they never cease to amaze with ther dedication.”

Leinster finished on top of Pool 6 and booked a home quarter final berth, which was just reward for a sizable Leinster crowd in the attendance of 37,323.

Sexton kicked the visitors into an early 3-0 lead but Chris Malone levelled the scores in the 34th minute after both kickers had failed to hit the target with penalty efforts.

Gordon D’Arcy came close to the game’s opening try when Isa Nacewa’s pass was adjudged to have arginally drifted forward, but a minute later Nacewa snuck in the corner after some bright work fron the industrious Eoin Reddan.

Sexton missed the difficult conversion, but Leinster took a 8-3 lead at the interval.

The second half took tme to spring into life with both sides jostling for possession, but in the 66th minute Exiles out-half Malone darted in to score a try to again level the scores.

As the game drew to a tense, highly charged finale Malone pushed his side into the lead with a penalty in the 77th minute after a spell of pressure from the hosts, before Sexton stepped up to slot home a superb drop goal with a little over a minute remaining to seal a draw.