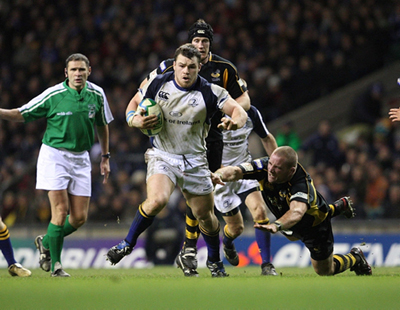 Leinster earned a losing bonus point in a 19-12 defeat, but could have almost snatched victory against a stubborn Wasps side at Twickenham on Saturday night…Michael Cheika Post Match Reaction…

Speaking after the game, Leinster Coach Michael Cheika said: “There were a lot of different permutations during the game, but it was a really torrid encounter, to say the least.

“We stayed in there, but we couldn’t get any flow going, but credit to Wasps who played very well. I thought that our lineout held up well.

“CJ (van der Linde) hurt his foot again, while Stan Wright has a neck problem and it looks like Leo (Cullen) hurt the same shoulder again. At this stage we don’t know if there’s a dislocation, but we’ll assess him in the coming days.”

Danny Cipriani kick the hosts into an early 3-0 lead, before French wing forward Serge Betsen snuck over for a try in the 14th minute, which Cipriani slotted home, to give Wasps a 10-0 lead.

Leinster dug deep and Felipe Contepomi kicked a 19th minute penalty, though Cipriani regained the 10-point advantage moments later with his second penalty of the evening.

Buoyed by a sizable proportion of the 33,282 capacity, Leinster added two more penalties from the boot of Contepomi (33 and 40 minutes) to reduce the deficit to 13-9 at the interval.

The game ebbed and flowed in the second half and Cipriani added a 59th minute effort to edge his side into a seven point lead before Contepomi again struck back with his 12th point of the evening.

Substitute fly-half Dave Walder kicked a late penalty, but Leinster showed resilience to hold on for what could be an important bonus point ahead of the visit of Edinburgh to the RDS next weekend.