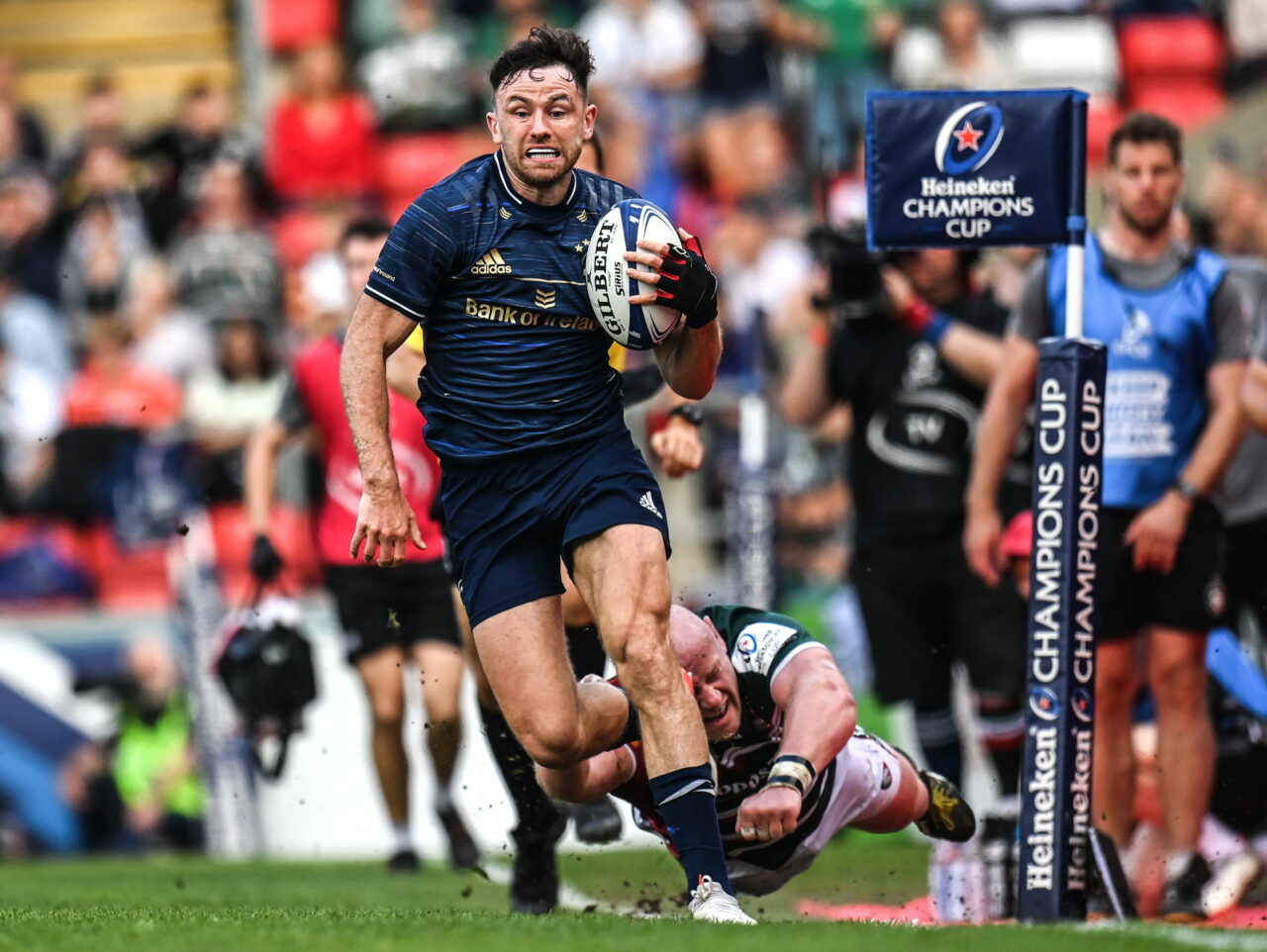 Leinster Rugby are through to the semi-finals of the Heineken Champions Cup after a 23-14 win over Leicester Tigers at Mattioli Woods Welford Road.

A 20-point first half lead was enough breathing room for Leinster to see out the victory, coming through tries from Josh van der Flier and Robbie Henshaw.

Tries by Josh van der Flier and Robbie Henshaw paved the way for Leinster to move into the Champions Cup semi-final at Welford Road on Saturday evening.

The Tigers were keen to make an early impact but it was the visitors who started liveliest and that would eventually show in the 20-0 half-time scoreline.

Leinster were into their stride from Jamison Gibson-Park’s measured high ball and strong carries from Caelan Doris and Jack Conan which drew a penalty for Johnny Sexton to strike from 30 metres in the fourth minute.

A misjudged clearance from Gibson-Park handed Leicester a lineout on the 22, requiring James Lowe to take control of a garryowen.

The first scrum produced a Leicester penalty when Andrew Porter’s elbow hit the floor, prompting a fierce driving attack which was made redundant by Sexton and James Ryan forcing a knock-on. 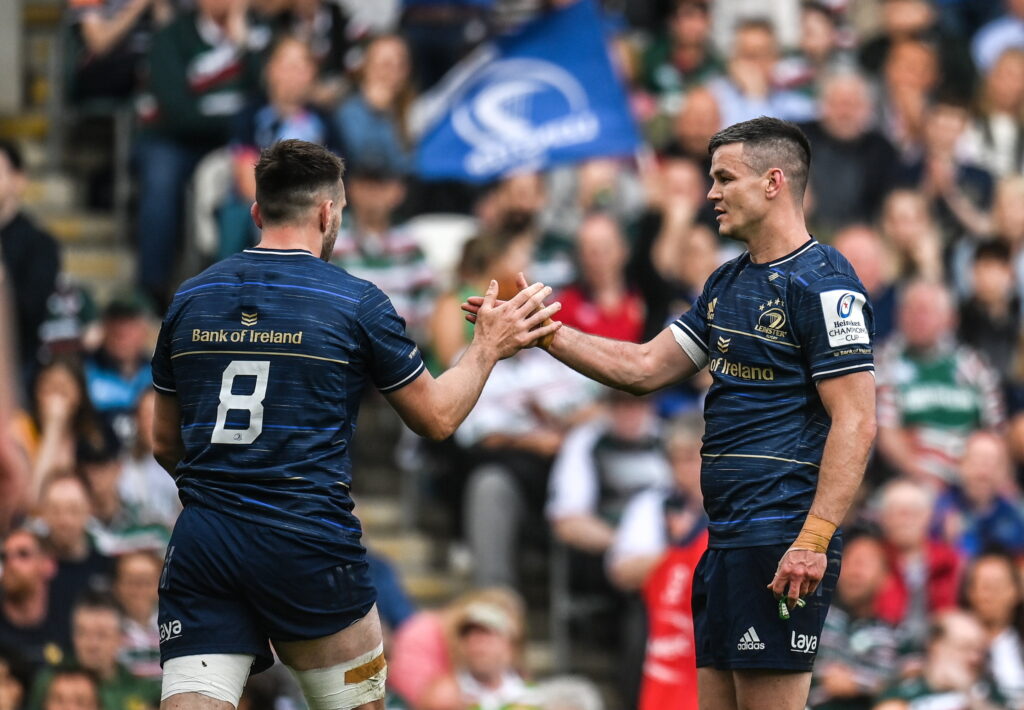 The next scrum was a chance for Leinster to make amends, the pack turning Tigers inside out for a penalty.

Then, Lowe triggered a counter from the claim of a high ball and Hugo Keenan got away up the left, Rónan Kelleher’s fine line undone by Tommy Reffell’s excellent floor work.

It wasn’t long before Gibson-Park was hurtling through a hole and Sexton’s skip pass put Lowe on the ball only for Freddie Steward to stand his ground.

Leinster were playing on a penalty advantage, deciding to go to the corner where Conan’s take was moved forward for van der Flier to find the line.

Another penalty and lineout followed. The punch in the carries started and finished with Henshaw, the centre eventually arrowing between George Ford and Jasper Wiese for Sexton’s extras to take the lead up to 17 in the 22nd minute.

The vigilance of Gibson-Park in snuffing out a trick lineout was quickly countered by back-to-back tackles by Reffell on Lowe and Henshaw.

A breakdown at a Leinster lineout allowed the Tigers to apply pressure until Ryan flew high to steal hooker Julian Montoya’s throw.

Leinster stayed patient in defence and adopted the same approach in attack, led by Sexton.

A bout of kick-ball ended with Garry Ringrose nabbing full-back Steward in the backfield for Gibson-Park to clamp down for a penalty which Sexton nailed for 20-0 in the 38th minute.

Stellar work by Keenan, involving a catch and carry, allowed Leinster to play in the right area until the home side broke away, Chris Ashton’s kick ahead gobbled up by Keenan to end the half. 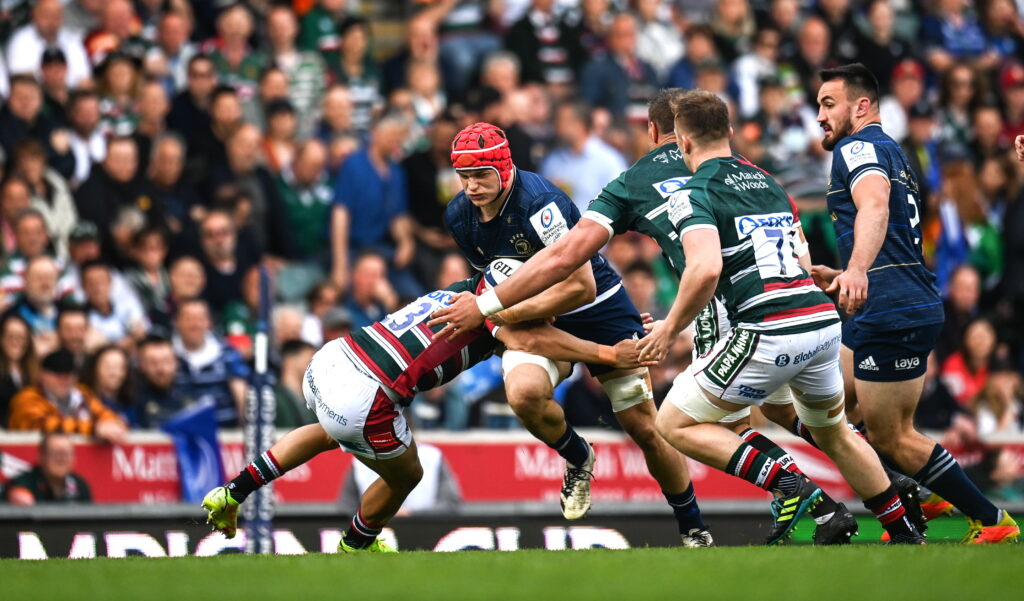 A barrelling Leicester maul was followed by a second crooked throw-in by Montoya and a short Lowe clearance.

The Englishmen stayed on the attack, generating front-foot ball from a maul. George Ford’s pass put Ashton outside Keenan in the left corner.

A long ball forward by Ben Youngs and Doris’ failure to hold the ball gave up field position.

Ford kicked to the corner from a scrum penalty. Nemani Nadolo was held up over the line by Jimmy O’Brien and van der Flier.

The pressure was growing. Ryan rose to snatch a five-metre lineout against the throw. Jimmy O’Brien claimed a skyscraper from Ford. Sexton secured the ball on the floor and the Blues were quickly up to close down Nadolo.

Leinster were finding it difficult to escape their half. Henshaw’s intervention and Conan’s ball control from a block down almost cracking the cover against the run of play.

However, there was the consolation of a 5-metre scrum, the carry from Conan earning a penalty for Ross Byrne, just on for Sexton, to make it a three-score game in the 66th minute.

The Leicester scrum continued to have an impact before Leinster turned the tables in a crucial engagement close to their line.

The scoring stalemate suited the visitors as the minutes moved by, Leicester finally delivering on their promise at the maul when Nic Dolly grounded for Ford to convert one minute from time. 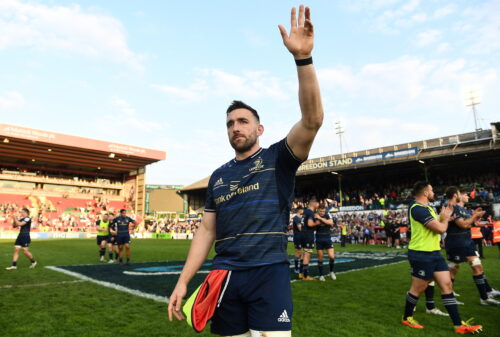 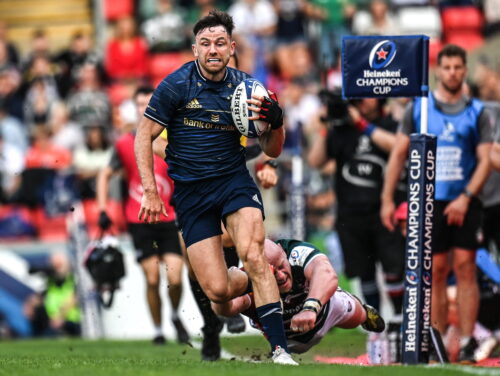 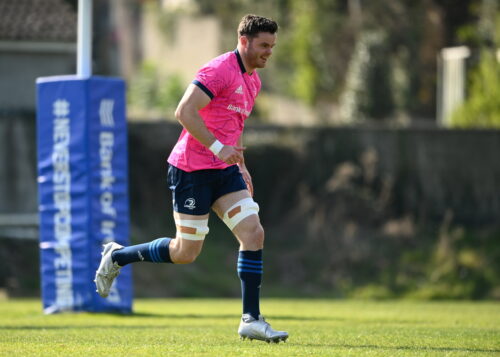 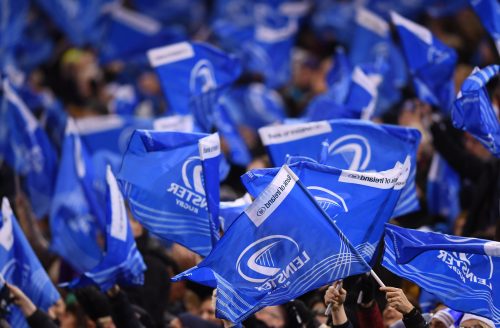 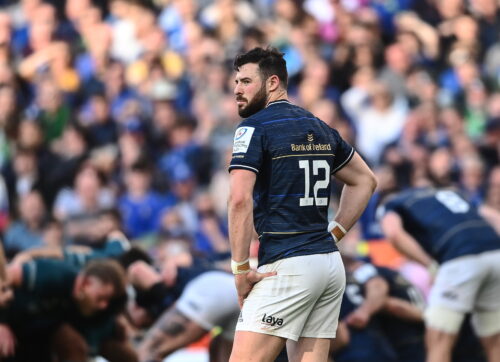